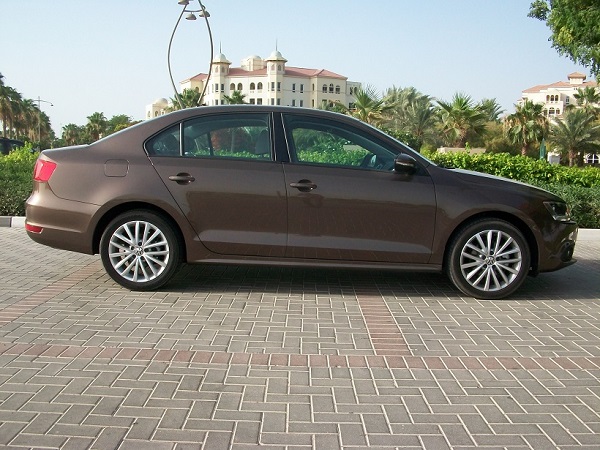 In its previous generations, the Jetta has been known as a compact sporty sedan. How does the new 2013 model compare? Well, it is noticeably larger, but less expensive! That's right. The new Jetta is larger and costs less than its outgoing previous model.

The ICRS: a system that automatically unlocks the doors, turns off the fuel pump, and activates hazard lights in the event of an airbag deployment. Well that is just one new feature of the new Jetta!

At the first sight inside, the interior looked conservative, yet very appealing and luxurious, especially the feel of the high quality leather seats, yet, why would VW place the Push-To-Star button in a rather awkward position? I found it inconvenient that it's positioned in front of the gear handle.

Finding a perfect seating position was no hassle and I liked how the seat was electronically controlled and had extra back support pillar that you could electronically control as well. Then there was the cabin space which, to be honest, made me forget I'm sitting in a "compact" sedan. Even at the back, the space was still very generous. There's enough head room and leg room for four adults to ride long distances very comfortably. One might wonder, why not five? Well, the huge transmission tunnel does make it a little awkward for the rear middle seat passenger to place his or her legs. But do not worry; the rear passengers get a power plug and cooling vents to their own to adjust to their comfort! 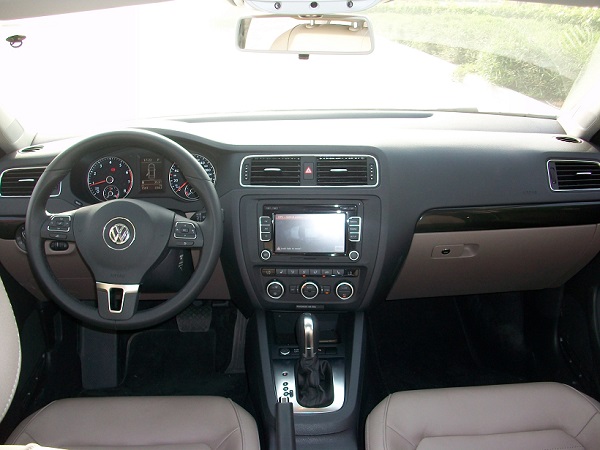 The steering wheel, which was made out of soft and smooth leather, felt really good in the hand. Along with basically every button you can push or anything you can move like the turn signal lever. They all felt of high quality and premium to operate with. The dash had soft touch material which felt pretty nice. However, the top of the door trims were made of hard plastic as a way to compensate and reduce its price.

I also liked the onboard media system which included a big enough touch screen that made everything so easy! This car has plenty of options for streaming media that included; FM/AM, AUX in, media card/SD card input, IPod connection, and even Bluetooth audio! As a matter of fact, it doesn't just stop there. It has full Bluetooth connection for your phone.

Over all visibility was excellent. And if you go to the back and open the boot, you would be surprised to see how roomy it was! That's not even my favorite feature. I liked how while having the boot opened, you can fold down the rear seats by just pulling on the conveniently placed trunk mounted releases.

So how does the Jetta perform out there on the roads? Being a Golf with a slightly longer wheel base and a boot, expect the handling to be a grade above the usual in its class. The steering wheel feels precise, although slightly heavy at times. This, however, does give you more control and is fun at high speed cornering. Moreover, the highway ride is controlled and comfortable. Thanks to extra sound proofing, the cabin is extremely quiet no matter where and how fast you're driving! It gives you that premium feel you get from Mercedes and the likes.

The suspension is slightly firm, but performs a wonderful job in absorbing most flaws of road surfaces. Don't let that fool you though, the Jetta has loads of grip and you would hardly feel any significant body roll.  Moreover, the Jetta comes equipped with front and rear disc brakes as standard. Therefore the braking power is decent and the ESP anti-skid control keeps you feeling confident on the roads.

The real downside to driving this car is, without a doubt, the engine. Unfortunately, in the Gulf region, we only get an outdated 2.0L 4-cylinder engine unit pushing out an embarrassing 115 horsepower mated to a 6-speed shift-able automatic gearbox. 0-100km/h is achieved in about 11.7 seconds.  That is considerably weak in today's standards. The Honda Civic's 1.8L engine pushes out close to 140 horsepower! I wonder why VW does not offer the Jetta with more engine choices in this region. At least you'd expect it to be very economical, but then disappointment strikes again - it isn't. The gearbox helps keep the engine in low revs at high speeds. This does save fuel. However, due to the fact that you really have to push the engine to within one inch of its life quite often, the engine ends up burning more fuel than you would expect. Then there was growl of the engine which sounded more like a bear's upset stomach.

Do you have at least AED 70,000? Are you a fan of German cars?  Do you not care for the latest model not being as premium as the outgoing model? Are you looking for a roomy compact sedan that combines both practicality and fun handling? The Jetta might be just the right car for you!