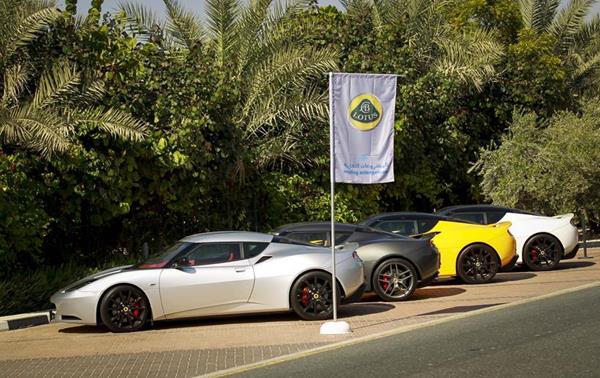 Recently we were invited by Trading Enterprises, the authorized dealers of the Lotus brand, for a day around Dubai in a convoy of Lotus Evoras. The convoy consisted of 4 Evoras, 3 of them were the supercharged versions and one was the naturally aspirated version. Let’s take a look at how the day went and what the car did for us. 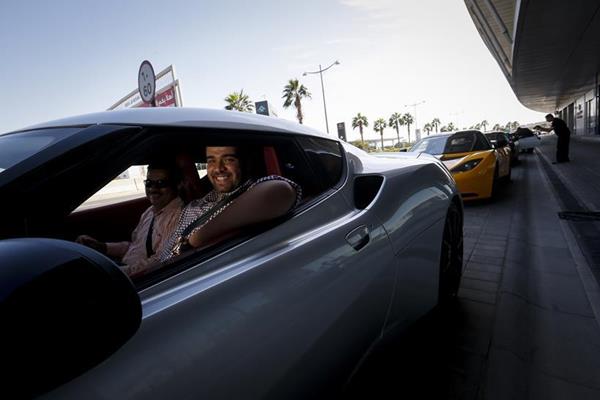 I was placed in the first car in the convoy that happened to be an Evora S which is the supercharged version. At a first glance the car looks spectacular! The way that the body is styled and is properly integrated with the wedges and the rear spoiler is perfect. The car was in an awesome silver color and the black wheels and blacked headlights compliment the color perfectly. The thing that attracted me the most about the car is the way that the intakes are perfectly wedged in the side of the car that give it this crazy supercar look. Lotus has also put a glass panel to cover the engine which also adds to the supercar feel of the car. 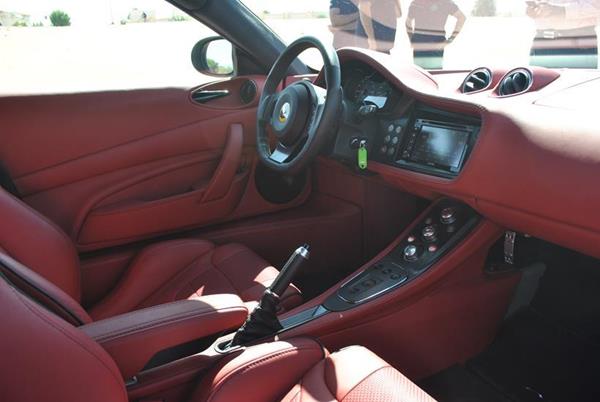 Being a sports car, the lotus had bucket leather seats that are also red to compliment the rest of the car’s interior. The car was rather tight on the inside especially on the left side of the driver in the foot well, because the body curves in towards the middle of the car the interior does the same so the driver’s left leg can never sit comfortably. I am 1.86 meters tall, so I was expecting the car to be extremely uncomfortable and tight, but to my surprise it was not as bad as I expected. The seat set up of the Lotus Evora is 2+2 which means there are two full-fledged sport seats up front and 2 smaller seats in the back with almost no leg room at all. Personally I think that having the extra 2 seats in the back is pointless, because they will never be used as they are impossible to get into and sit comfortably in, and also the engine noise will be defining because the Evora’s engine sits right behind these seats given the fact that it is a mid-engine car. The interior of the Evora has a proper supercar feel to it where the steering wheel has almost no controls on it, the center console has no gear lever and buttons are used to put the car into gear, the gauge cluster is very basic with no fancy screens. All you get are the speed and RPM dials along with two smaller red dot-matrix screens on either side to give some extra info about the car. 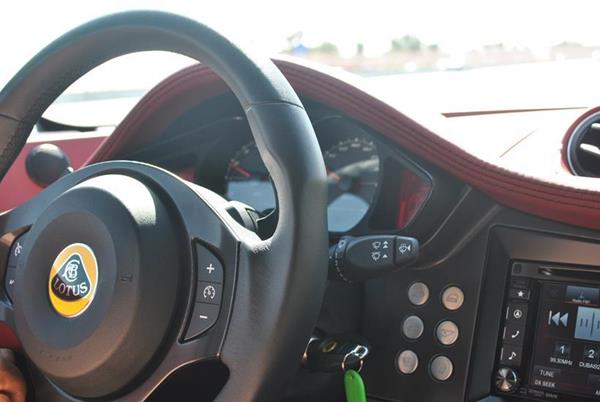 One of the things that really grabbed my attention about the interior of the Evora S is the attention to ergonomic friendliness. For example the paddle shifters are curved backward to allow the driver’s fingers to dig into them and provide easy and comfortable shifting. Also, the steering wheel has deep grooves on the inside for the thumbs which helps to give comfortable and excellent steering grip. There is also a rather large grove that goes along the side the center console which give a little bit more room for maneuvering your right leg. 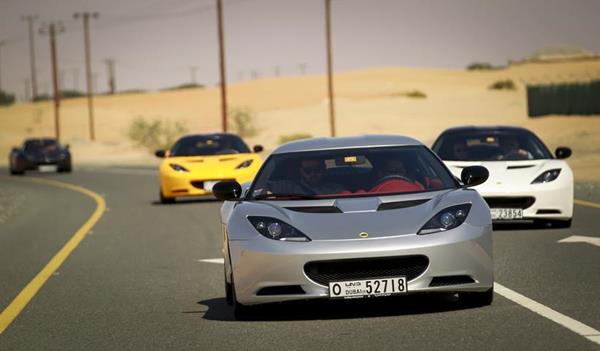 Being a sports car, the Evora S is not the most comfortable ride in the world. Suspension is rather stiff and the right cabin makes it rather impractical for everyday drives. As you will feel every single bump on the road hitting the wheels and continuing into your spine. The noise of the engine is awesome, for the first hour or so, but then it becomes rather annoying after a long drive. The engine’s drone is rather high when on the highway. but all of this is expected, because keep in mind, that this is a sports car, it is not designed to be comfortable. 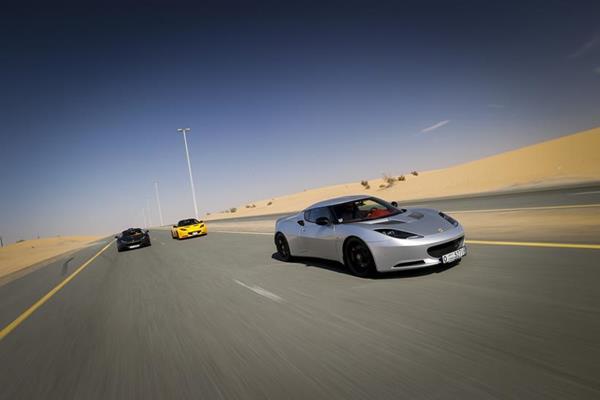 To the part that is most important about this car, the Lotus Evora S is powered by a Toyota made 3.5 Supercharged V6 which spews 345 Horse Power which means the Evora S can be shot from 0 to 100 in 4.4 seconds! This is part of the philosophy that is adopted by Lotus where if the car is relatively light you don’t need a huge engine to make it perform properly. In the Evora’s case, the car weighs 1400 KG.

The engine noise is music to the ears, and the exhaust tone is nothing short of spectacular. The best part about this is when the Supercharger kicks in and you hear that amazing wine that is accompanied by a surge of linear power!

The Evora’s gear changes are somewhat violent, which in my opinion adds to the supercar feel of the Evora. Driving this car on regular drive mode is honestly like having a loud set of speakers and keeping them at the lowest possible volume, in other words pointless and honestly boring. Naturally I drove the car either using the paddle shifters and sports mode. In sports mode the car’s gear shifts are on point and quick to kick in, the downshift also are on perfect point and they are also accompanied by a noise that is nothing short of awesome. When using the paddle shifters, sports mode becomes boring, because shifting with the paddles makes the gear changes even quicker which give you the feel of being in control of the car. 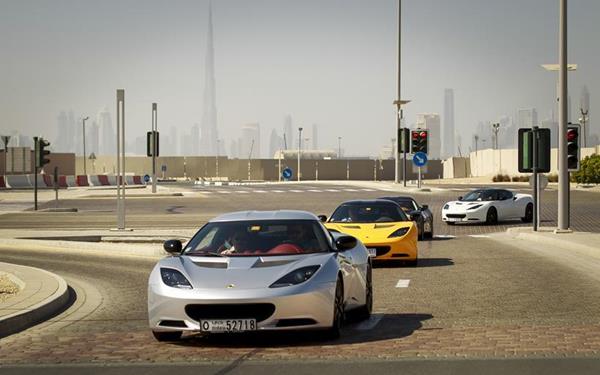 Lotus cars are known to be one of the best handling cars out there; the Lotus Evora S was no different. During our drive towards the Hatta Oman border we were faced with some tight elbows and bends that would push other cars to the edge. I threw the Evora into a bend at speeds exceeding 150 KMPH and it handled it perfectly, the only noticeable thing was that there was a little tire squeal. The Lotus Evora’s Chassis is excellent and very responsive, where it follows the path that you set for it and does not wobble about and go off course which is one of the things that lotus took extra care of when they were creating the Evora.

The lotus Evora S is one hell of a car to drive and be in. it has excellent power and outstanding handling capabilities. Also the fact that is uses a Toyota engine means that the engine’s reliability would be excellent. It is true that the car is rather tight on the inside, but that is expected of a sports car. With all this in mind I can safely say that the Lotus Evora is catching up to the big boys such as the Porsche Cayman S.