The car you see above is the Chevrolet Bolt and there are three important things you need to know about it: it’s a hatchback, it’s fully-electric, and it costs a whopping 174,500 Dirhams in the UAE. By the time you’re done reading this review, you’ll learn more about the Bolt but also be in a better position to understand if you should invest your hard-earned money into an electric vehicle or stick with a petrol-powered car. 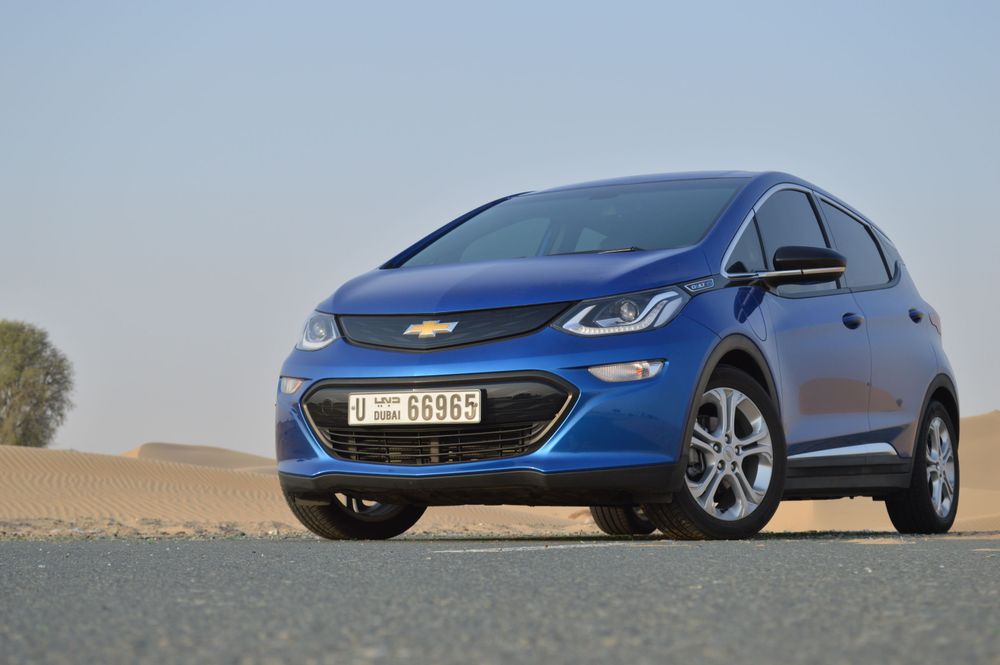 The Chevrolet Bolt is a bit of an oddball and that’s because it sits right in the middle of being a hatchback and a compact SUV. Its styling and ground clearance match those of a hatchback but its height and overall dimensions are closer to those of a compact SUV. Despite lacking traditional components such as an engine, radiator or exhaust pipe, the Bolt looks very much like a regular car and that’s a great thing as the designer’s have managed to differentiate it from other models in the brand’s line-up, without making it look awkward. 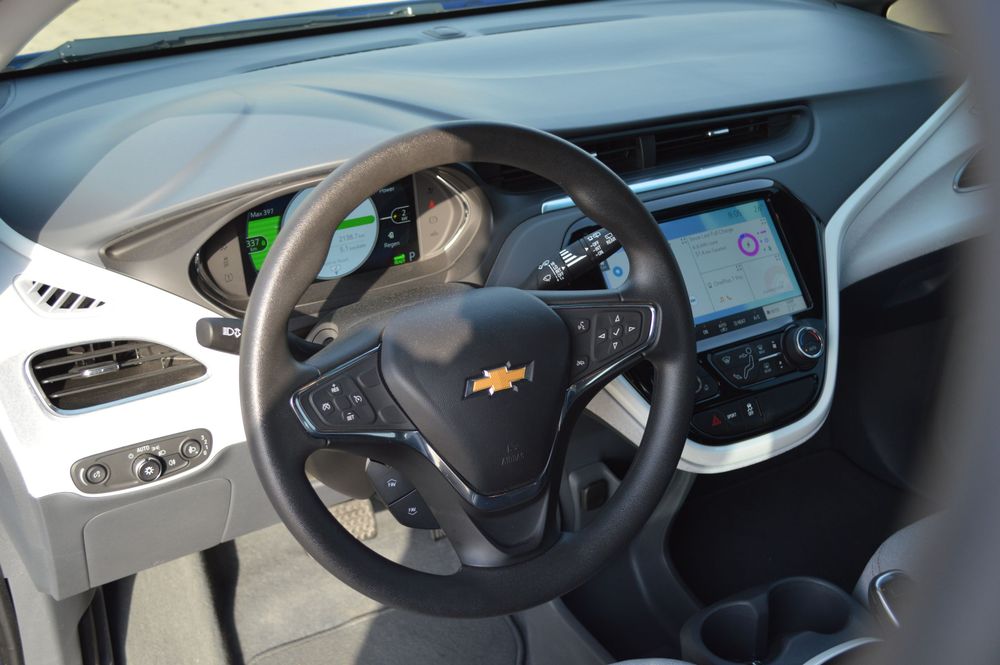 The interior is a bright, spacious and pleasant place to be with a two-tone color scheme livening up the dashboard, door panels, and fabric seats. While there are plenty of convenient storage spaces and large cupholders, there is an unacceptable amount of hard plastic all around the cabin, which quite frankly, you wouldn’t expect when paying over 170,000 Dirhams. 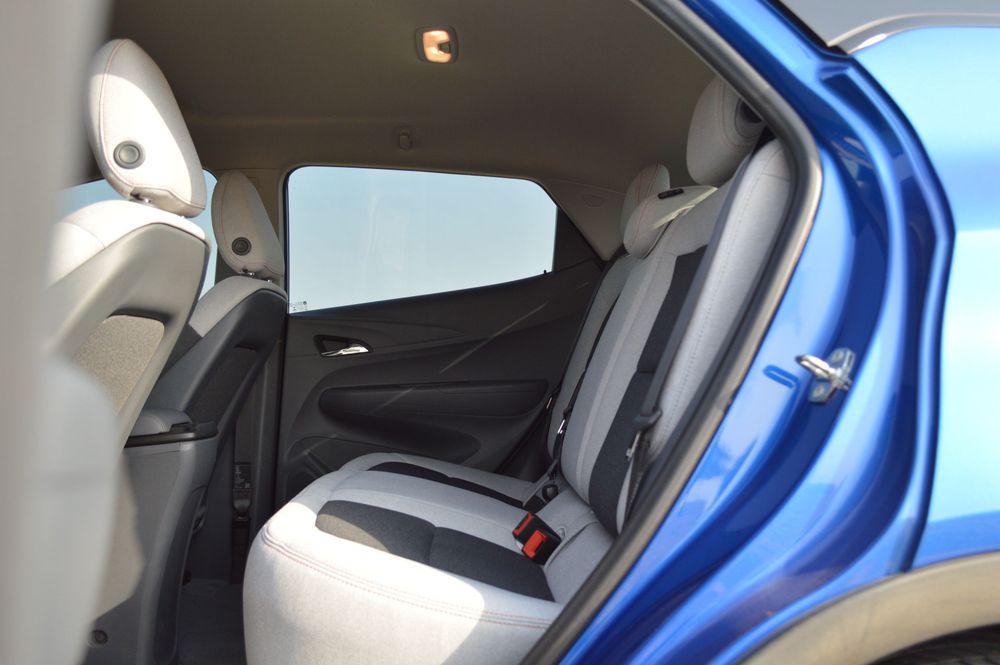 In the back there’s a surprising amount of headroom and legroom and since there’s no protruding transmission tunnel, the flat floor means three adults can sit quite comfortably. Although there aren’t any rear A/C vents, the Bolt does offer two USB charging ports, something that is sure to be loved by the younger crowd. 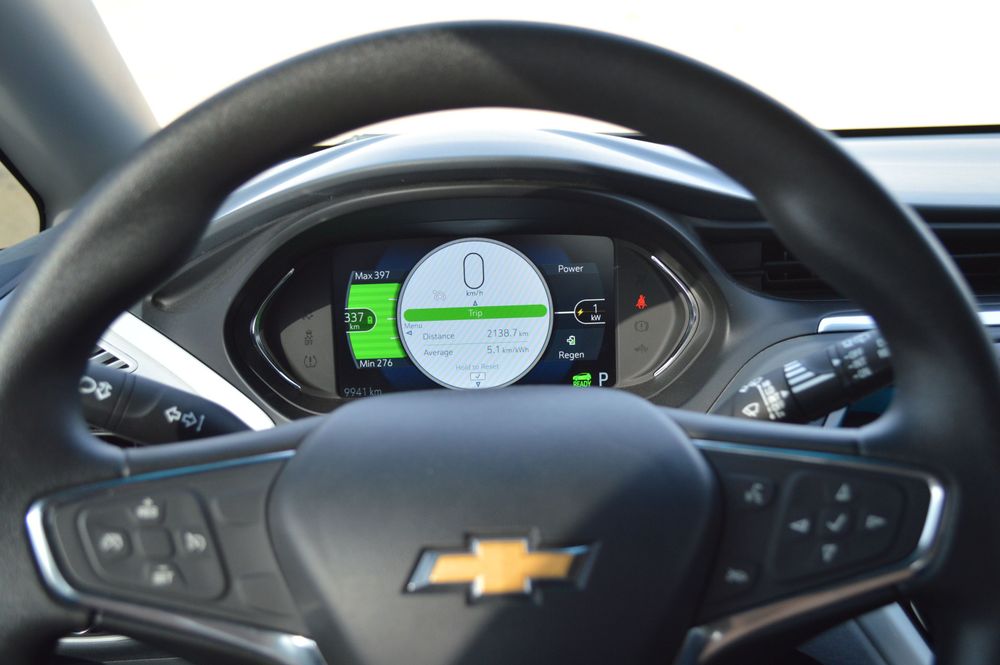 In terms of features the Bolt is moderately equipped and offers cruise control, six airbags, and automatic air conditioning, along with a digital instrument cluster that Chevy calls a Driver Information Center since it can be customized to show information most relevant to you: Timer, Avg Speed, Tire Pressure, etc. 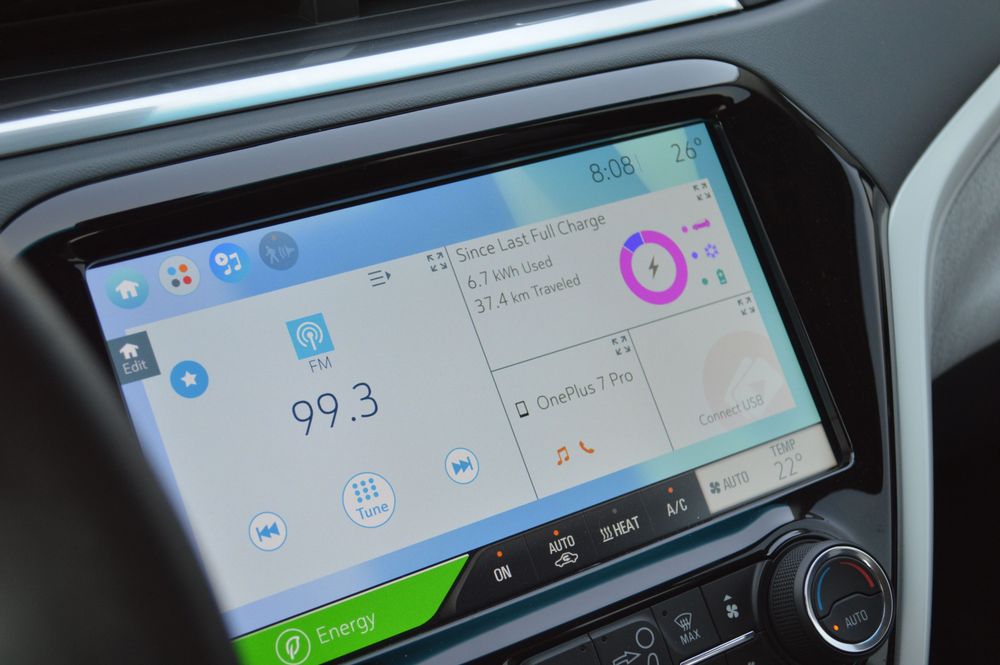 While the 10.2-inch infotainment screen takes center stage and offers Android Auto and Apple CarPlay connectivity, as well as several charts to help you understand and better your electric vehicle driving skills, features such as leather upholstery, mood lighting and wireless charging have been restricted to other markets around the world. 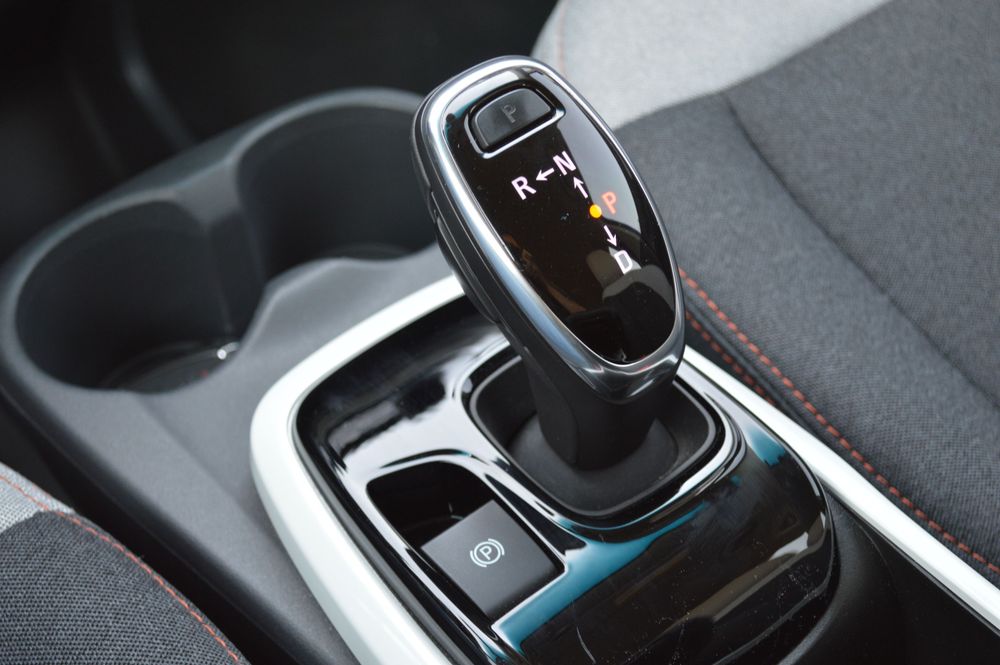 Powering the Chevrolet Bolt is a 60-kWh battery that produces the equivalent of 204 horsepower and 360 Nm of torque. While it doesn’t sound like much, the Bolt has been tuned for acceleration rather than top speed and so it does feel fast when you put your foot down; much faster in fact, than its claimed time of 7.3-seconds to 100km/h.

Like all other EVs out there, the Bolt is equipped with regenerative braking and so each time you press the brake pedal, it converts the kinetic energy that was being used to push the car forwards into electricity and saves it in the battery for use later on. 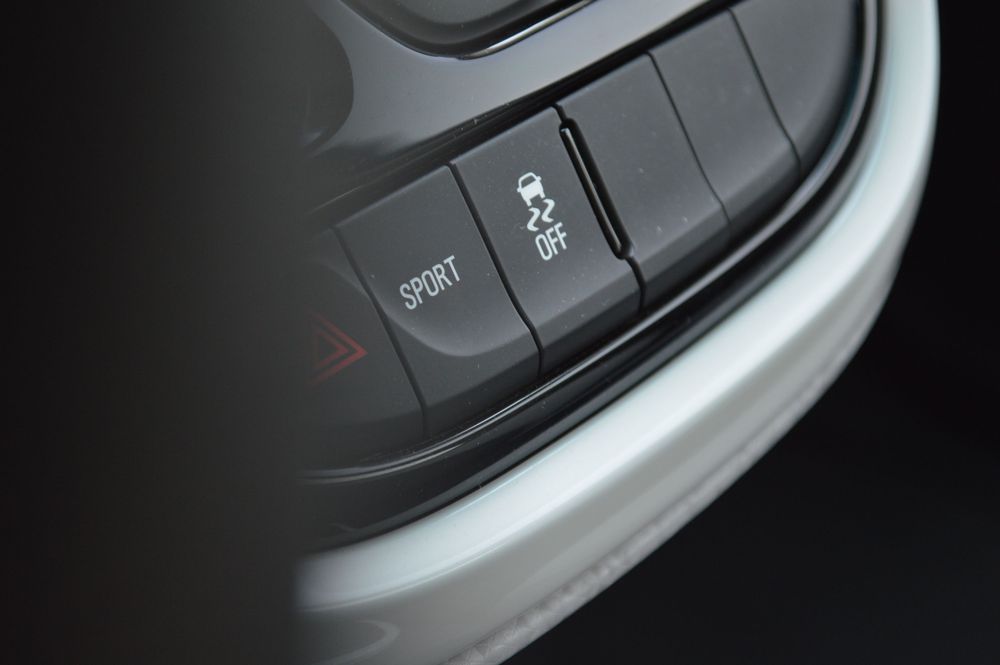 On the other hand, One Pedal Driving is achieved when you drive in Low mode and at any speed. You can slow down and come to a complete stop by simply lifting your leg off the accelerator pedal. This in turn means less energy wasted, more convenience, maximum driving range, and even extends the life of your brakes. 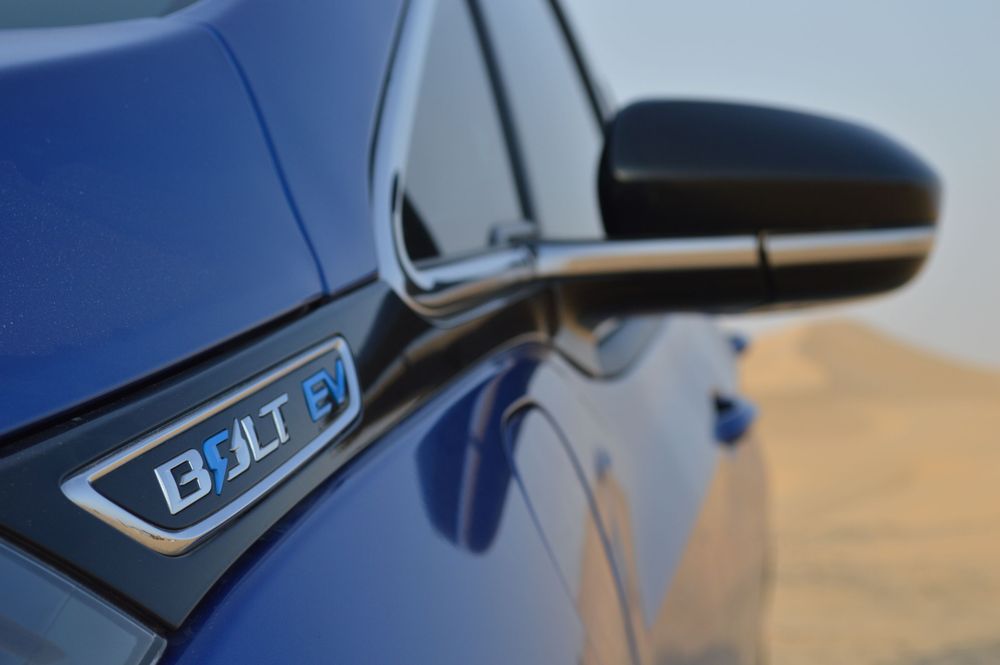 But now let’s keep all of that aside and answer the important stuff, like how many kilometers can you get on a full charge, and more importantly how long does it take to charge? The Bolt claims a NEDC range of 520km per charge but since this is unachievable in the real world, the WLTP average of 380km is more accurate and the number you’re likely to see in your instrument cluster.

In terms of charge times, it is solely dependent on the type of charger you use. A regular home socket would give you 12km of driving range for each hour of charging, meaning 31 hours to get a full charge. 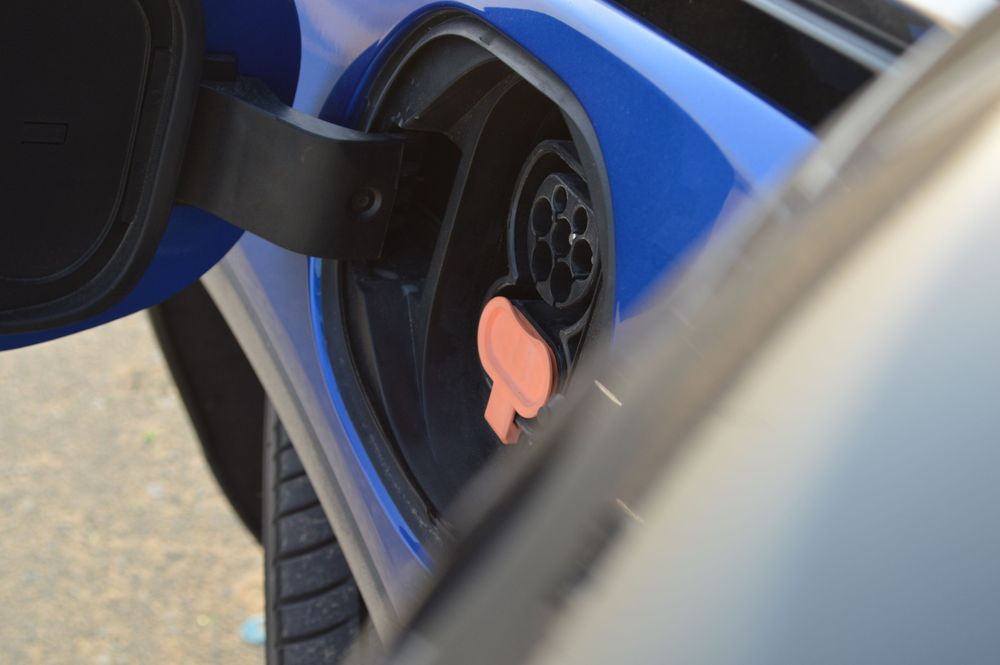 A slightly faster charger such as the one found in most malls would give you 40km of driving range for each hour of charging, meaning you would still need 9.5 hours for a full charge. And then there are these super-fast chargers that can charge the entire battery in 1.5 hours but there are just 8 of them in Dubai and that brings me to my next point. 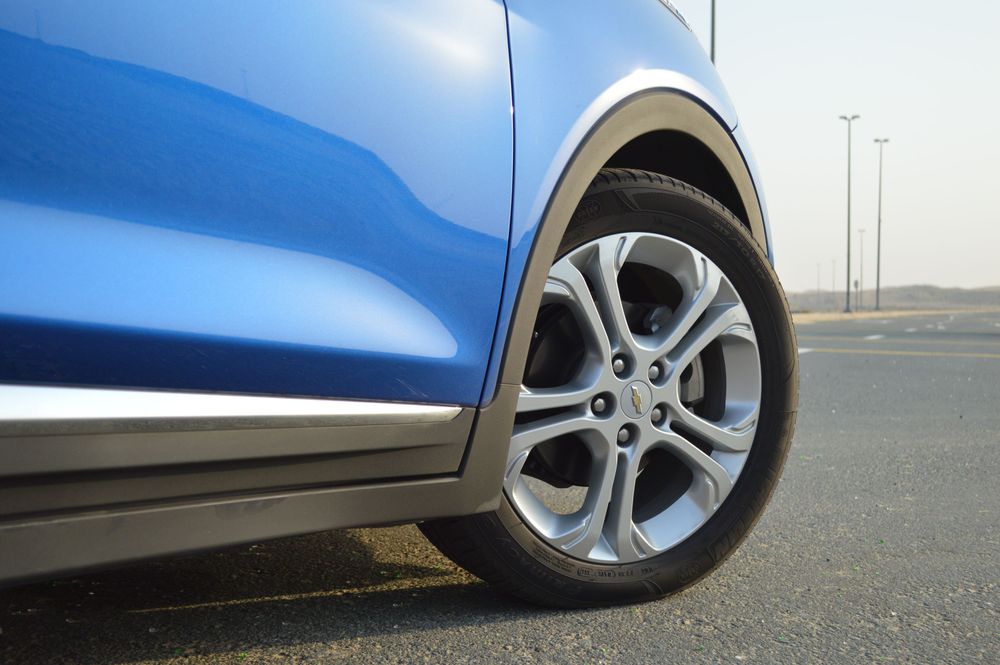 What I am trying to make clear is that owning an EV at this current point in time, is inconvenient and to prove my point I’d like to share a little story. As the Bolt was running low on charge, I went to charge it up yesterday and as luck would have it, the first charger I went to, didn’t work. I drove further away and reached the second charger, which also didn’t work. Leaving me no other choice, I drove even further to get to the third charger, (thankfully it was empty and it did work) but since the car needed nearly 7 hours to charge I was left with no option but to pay a cab to take me back to the office, which if you think about it defeats the purpose of having a car. 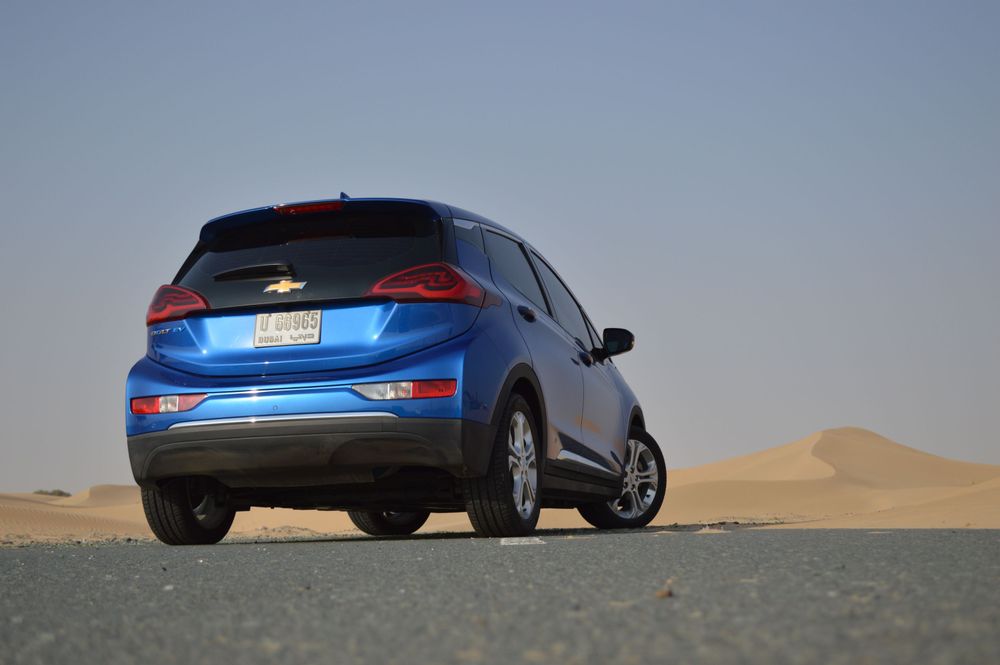 Electric Vehicles have been in the market for a few years now, but they’ve struggled to take off and it’s pretty clear why; they are overpriced and a hassle to live with. If you’re hellbent on driving a vehicle that’s good for the environment perhaps a hybrid such as the Camry Hybrid we recently tested is a better option, it provides all the benefits of an EV without any of the hassle. However, if you want an EV and nothing but an EV there is some good news too, the Bolt comes with a 3-year 100,000km warranty and a separate 8-year/160,000km on the battery.