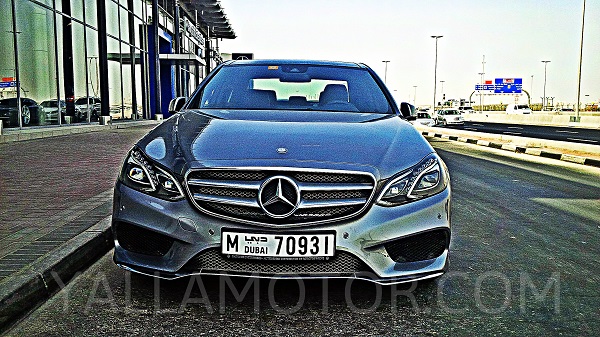 When it comes to luxury cars, Audi A6 is one of my favorites. I personally see it as the best among premium midsize sedans. So when I got the news that I'll be driving the 2014 Mercedes-Benz E 300 I was excited to see if my mind would change. I have driven the E-Class Coupe of the earlier generation and I can easily say this one is a totally different car in more areas than others. Let’s see how... 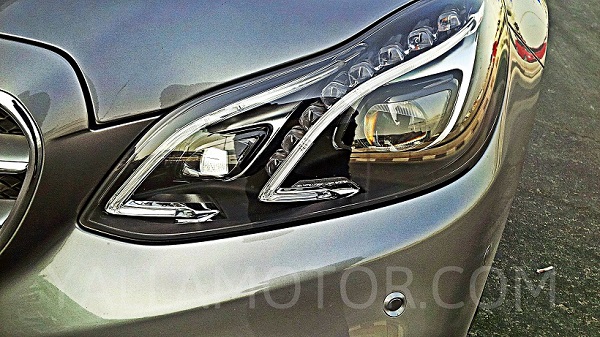 The updates on E-Class style make it a lot more aggressive looking with corners and edges and lines all over the car, more noticeably in the front. The front end of the E-Class sports redesigned lights and bigger air intakes. New additions also include a reshaped and repositioned grille along with the famous star slapped in the middle. The sleek lines that run along the side of the E-Class give it a wider look and a meaner stance which makes it even better to look at. It has been said that every time Mercedes-Benz launches a new E-Class, something fundamental in the car’s design changes. I can safely say this is evident in this model. The best upgrades on E-Class are the full LED headlamps which are completely new. The curvaceous daytime running LEDs complement the mean look of the E-Class front end. In addition, rear lights get a fair share of the redesign and they look a whole lot better than the previous ones where they are bolder and make a statement on the road.  The new styling is all about simple yet noticeable changes all around the car, such as the curved chrome piece above the exhaust tips which are also redesigned, and the subtle mesh inserts in the rear bumper.

The same cannot be said for the new E-Class interior. It remains largely unchanged from the previous model except for the gear selector which is now mounted to the steering column. This particular change is not the most appealing to me, because it takes away from the majestic feeling of being in a German car and reminds you of an old American pick-up truck where the gear selector is also mounted on the steering column. This change also leaves you with the sense that something vital is missing in the center console and leaves a bit of a void especially if you are used to driving with one hand on the gear lever. Apart from that, the interior of the E-class is expectedly classy Mercedes. The color of seats as they call it is “Chestnut Brown” which is extremely good looking and for some reason appetizing! The E-Class seats are very comfortable which makes them a dream on long drives but the square top half design again reminds you of the "pick-up truck” elements. The interior is very spacious, both cabin and boot. There is one simple feature in the E-Class boot that a stands out. It is the retractable storage compartment in the boot. The compartment is extended out via a sliding tray and then you push it down to the floor of the boot which makes a small bag-like compartment to hold all the groceries in place and keep them from sliding around in the boot of the car and making a mess which Mercedes-Benz appropriately called the Easy-Pack boot convenience package. 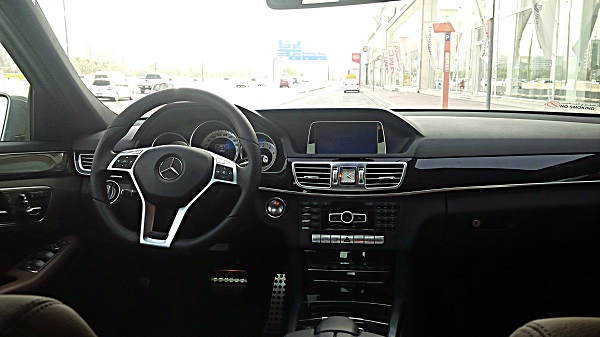 The E-Class’s on board computer was the same system that was fitted in the previous model except with the color theme change. The audio system was flawless where the sound was crisp and the bass would thump to your preference. But unfortunately the system did have its fair share of flaws, for example the navigation was not accurate at all. I was driving on Al Khail road and the navigation screen would tell me that I am 7 KM from the nearest road. This could be one of two things, the navigation system needs to be re-calibrated or the map is an old version which would be a surprise because this is a 2014 model. Another problem with the navigation is that the screen would say the turn is in 20 meters when in fact it is right next to me, this would render it useless for someone who actually needed to be guided to a destination. Similar to most voice recognition systems, the E-class system was not very good as it would take at least 3 tries to call the wanted person. I am yet to see a voice recognition system that comes even close to how accurate ford’s SYNC system is.  However, the update to the navigation visuals is very nice, where if you are driving on a highway, it would have a popup on the side of the screen 1KM before any exit with the logos of different outlets that are near that exit.

The new E-Class has multiple systems that will help the driver and people around the car be safer. The lane departure system works flawlessly, even when the road markings are not very clear. The distance alert system is also amazing. It will give the driver a warning if the distance between him and the car in front of him is decreasing rapidly. If the driver does not press the brakes, the collision prevention system kicks in and brakes are automatically applied. The collision prevention system also works for other cars. Say you are at a red light, and the car behind you is approaching fast. The radar in the rear end of your car will sense this and all the car’s rear lights will blink rapidly and very bright to catch the attention of the driver behind. The E-Class also has a 2-stage braking system. When the brakes are applied, the brake lights go on but when the brakes are applied with full force, the brake lights blink extremely bright. The E-class is also fitted with blind spot indicators, a backup camera and also a perimeter monitor which tells you how close you are to the sidewalk. The most fascinating feature in the E-Class is the attention assist; this system reads numerous signs that are picked up from the driver via multiple sensors that can measure the alertness of the driver. This system is virtually fool proof. For example you cannot fake being tired to see if it actually works, and it also gives you an alertness level bar which has 3 zones: green, yellow and red. When the system senses that you are not alert enough to drive the car, it will give off a loud beep with a violent steering wheel vibration, and a red message will appear on the screen saying “time for a break?” This is one of the best features to be in any car nowadays with constant accidents happening from drivers who are driving while they are sleepy. 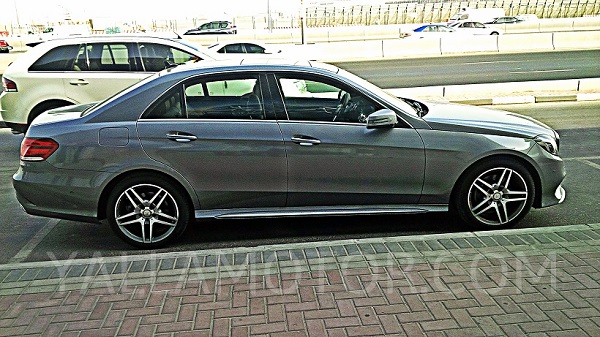 The E-Class is powered by a 3.5L V6 engine that sends the power to the rear wheels via a 7 gear Tronic Plus transmission which will together produce 248 Horse Power at the 6500 RPM mark and 340 Nm of torque at the 4500 RPM mark. All this translates to a tested 0-100 figure in 7.6 seconds, which is not too shabby. With such a setup the E-Class is able to cause a bit of a stir on the streets. Fuel economy was acceptable in the E-Class especially given my enthusiastic driving with highway figures of 7.8 L/100KM and city figures of around 11.4L/100KM.

The model we tested had the sports tuned suspension which made the ride a little bit firmer, together with the 18 inch AMG wheels this was a little noticeable which was a good thing because it eliminated that floating feeling that was present in the older model.  When you throw the E-Class around a bend at a somewhat enthusiastic speed it will hold its ground but not without making a scene as the wheels will screech, there is also a violent bounce-back when straightening out from the bend thanks to the sports tuned suspension, this does make it a little more fun to drive when you are in the mood.

With a price of 260,500 AED the new E-Class will burn a hole in your pocket, but in return you will get a car that is respected on the streets and at the same time very practical for medium sized families. Coming back to what I said in the beginning of the review, I still prefer the A6 over the E Class simply because of the A6’s cornering abilities and the cheaper price. The price is a little bit bloated for what the car actually is but at the end of the day it is a stunningly good looking E-Class. But if you are looking for a car to wiz about in then this is not your car.