Is The New Land Rover Defender Worthy Of Its Name?

Seventy years it took for Land Rover to make a new Defender. SEVENTY! We have 6-7 different generations of other cars in that much time. The Defender is a name or title not to be trifled with. It has a serious following across the world. The Defender has seen a few upgrades over the years but nothing that would put it in comparison to today’s modern cars. It has always been very analog, which is not a bad thing. However, if Land Rover wants the Defender name to be relevant for the next seventy years and become a more commercial and accessible name and product, they needed to thoughtfully come up with a brand new car for Generation Z.

Behold we have a new Defender! When it was launched, it split the automotive community into two halves. We have one side which screamed sacrilege! And then the other half which welcomes the new design language with open arms. The biggest complaint was that it took away from the rugged look of the old one and that the new was too digital. TBH I was not sure of how I felt about the new design language until I saw it IRL. But I knew one thing I like the styling of the 110 over the 90. Oh, the 110 means the Defender with four doors with seating for five, six, or 5+2 people depending on how you spec it and the 90 with seating for six people with two doors. However, at the Dubai Motor Show, I ended up meeting and interviewing Mr. Massimo Frascella, who is the Creative Head of JLR. The interview with him opened my eyes to the actual thought process of JLR. What they wanted to do was not resurrect an old icon but rather carry the genes of the old one and build an entirely new car for the coming generation. And you have to see sense in that. The world has changed drastically in the past twenty years and anything that a brand puts out today, which is going to be commercially successful has to appeal to the thought process of today. So I decided to drive the new Defender to be able to answer all the questions. 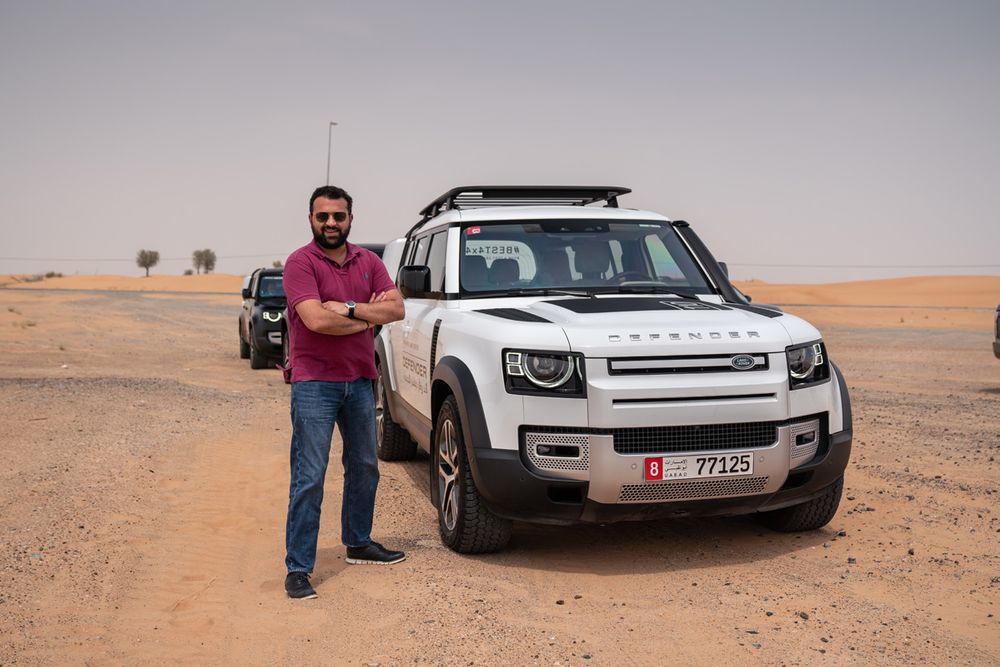 When a brand designs a car, a lot of thought goes into everything. In today’s day and age, there are multiple regulations that auto manufacturers need to adhere to when designing a car. Now the old Defender was butch and rugged-looking vehicle. It looked pretty much the same as the car in the 1940s. When you look at the 2020 Defender, you definitely can make out that it is a child of the old Defender. It has a lot of design cues from the old one.

However, in the old Defender, the seating position was definitely not the most comfortable. You had to be a hardcore car enthusiast to love the old Defender. However, it is easy to fall in love with the modern one. It has a very current design language. Sporting the same boxy and squared-off design language of the old albeit with modern features.

The Entire package is designed to do one thing and one thing only… to be the best off-roader money can buy. To achieve this Land Rover made sure that the car has short overhangs for better approach and departure angles. Ground clearance on the Defender is 291 mm with an approach angle of 38 degrees; a departure angle of 40 degrees; and a ramp break-over angle of 28 degrees.

To be able to be called off-road king Land Rover has spent time redesigning the entire chassis. The old Defender had a body on frame chassis (used on trucks, buses, and old off-roading SUVs) however another controversial decision that Land Rover made with the new Defender was to go with a monocoque chassis. To defend this move, Land Rover re-engineered their D7 platform and called it D7x (X for extreme) to be able to take in the extra abuse we will throw at the Defender while taking it off the beaten path. LR ran the car through 62,000 tests to make sure the vehicle, chassis, and engineering are up to mark. Oh! And let me tell you that the new monocoque chassis is three times stronger than the body on frame chassis.

Overall the Defender does look good, and I think LR did an excellent job. I can see this design evolving and easy to modernize and update as time progresses.

HOW DOES IT DRIVE? 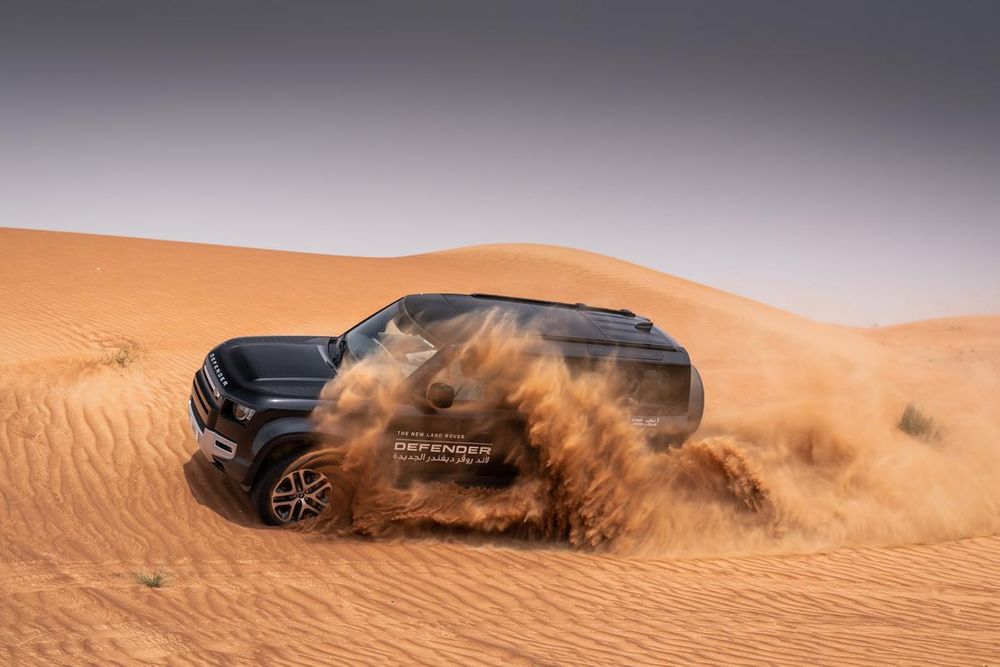 Let me answer the most important question first. The drive of the car is lovely. You have a choice of speccing the Defender with two suspension options, either coil-overs or air suspension. The 110 version which I drove had air suspension which as per Land Rover will be the most bought. The coil-over suspension will be purchased by the more hardcore customers who would like to modify the Defender.

The air suspension can be raised and lowered as per your requirement. When you are on the highway, the suspension is lowered to its minimum so that you get maximum aerodynamic efficiency and stability. When you go off-road, you can raise the suspension height to 291mm.

What impresses most is that when your in the city or highway the car cruises and behaves like any other luxury vehicle. It is smooth, refined, and comfortable. The driving position is excellent, and so is the visibility.

The second you decide you go off-road all you need to do is choose the right setting from the center console and drive. Rest, the car manages itself.

The genius over here is managing the electronics, software, and hardware to all work in sync with each other. Land Rover has executed this to perfection. No more understanding gear ratios, locking differentials, 4×4 systems. The whole process is just incredibly seamless. You will not even realize when the car actually raises or lowers itself. Call it Off-Roading for Dummies. Press a button and go—a true off-roader for Generation Z. TBH off-roading is more effortless in the Defender than ordering a pizza from an app.

WHAT ENGINE DOES IT HAVE? 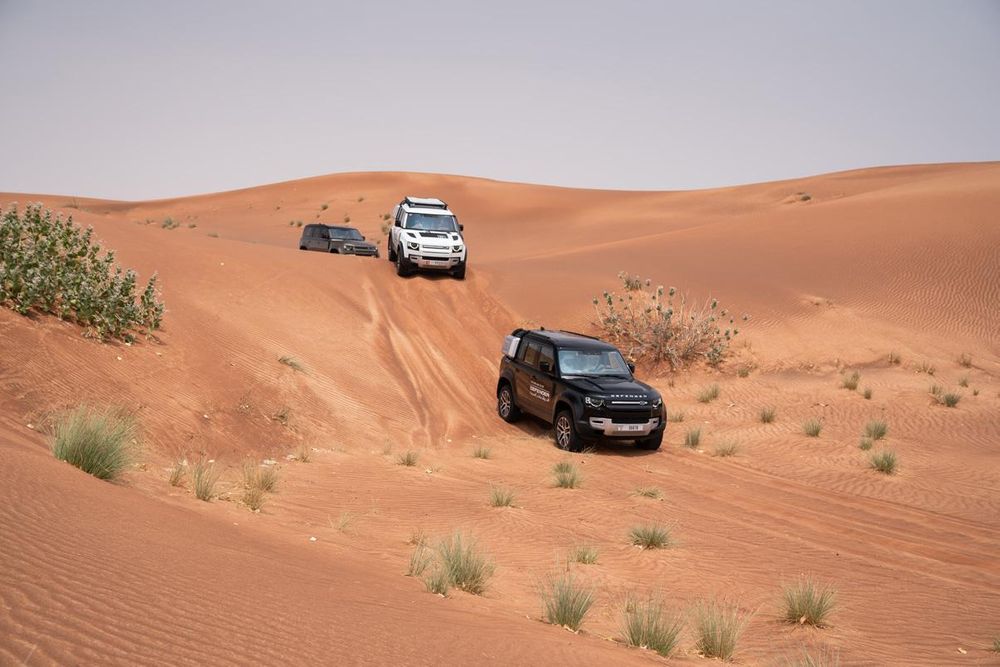 You can have the Defender with four engine choices from the JLR Ingenium range of engines.

All variants are fitted with a ZF 8-speed automatic transmission coupled with a 2-speed transfer case.

Now since I drove the car in Dubai, I drove the P400 with around 400HP. In a region where speed is in our veins, the Defender could manage respectable amounts of pace. It felt fast enough in the city and on the highways. However, do not think you can start dragging AMG G-Wagons at the light.

The engine is refined, potent, and smooth. This particular engine is a 48-volt mild-hybrid version. There are even rumors of a BMW sourced V8 down the line.

HOW DOES IT FEEL FROM THE INSIDE? 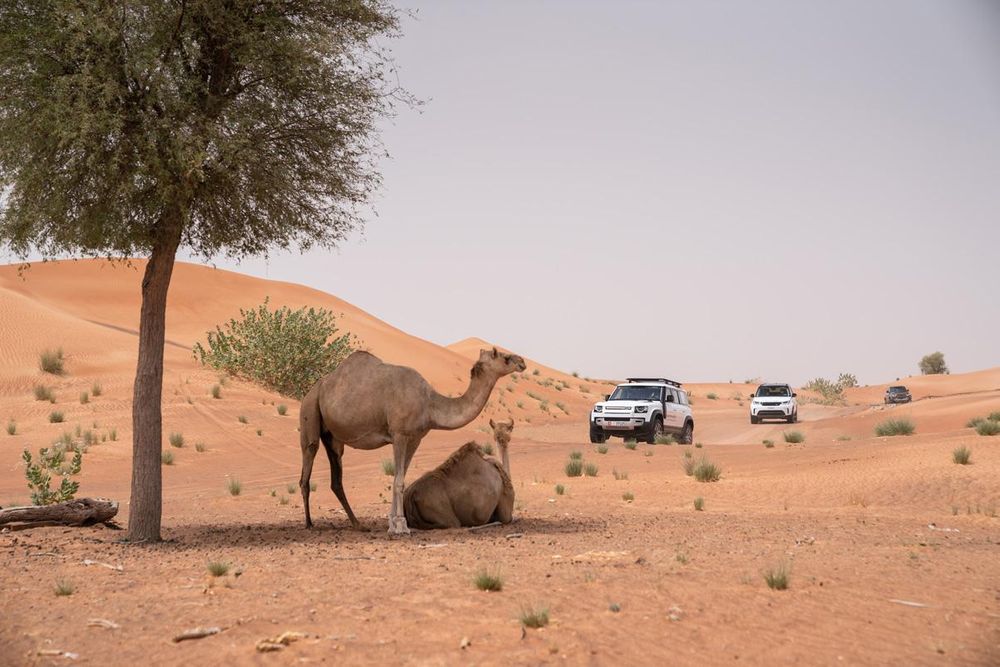 Land Rover has spent a lot of time designing the interiors. As soon as you get into the Defender, you know that this car is not your regular car. It reminds you that it can go Above & Beyond anytime you choose. The look of the interiors is utilitarian and industrial, which just reminds you that the car is meant to be driven off-road.

Everything revolves around the center of the dashboard. The center has a brand new screen, and all the controls and gear lever are just below the screen.

LR even came up with brand new materials that are durable, tough, and can take abuse. At the same time, they are cleanable and can be easily maintained. The interior can be customized to whatever combination of material you see fit for your use, from leather to specialized durable fabric or mix and match of both.

The entire cabin layout and is super spacious, and there is a ton of storage space, charging ports, and USBs all over the place. Both the 90 and 110 models of the Defender can be configured to have multiple seatings options as per your preference.

DOES IT HAVE ANY TECH AND OPTIONS? 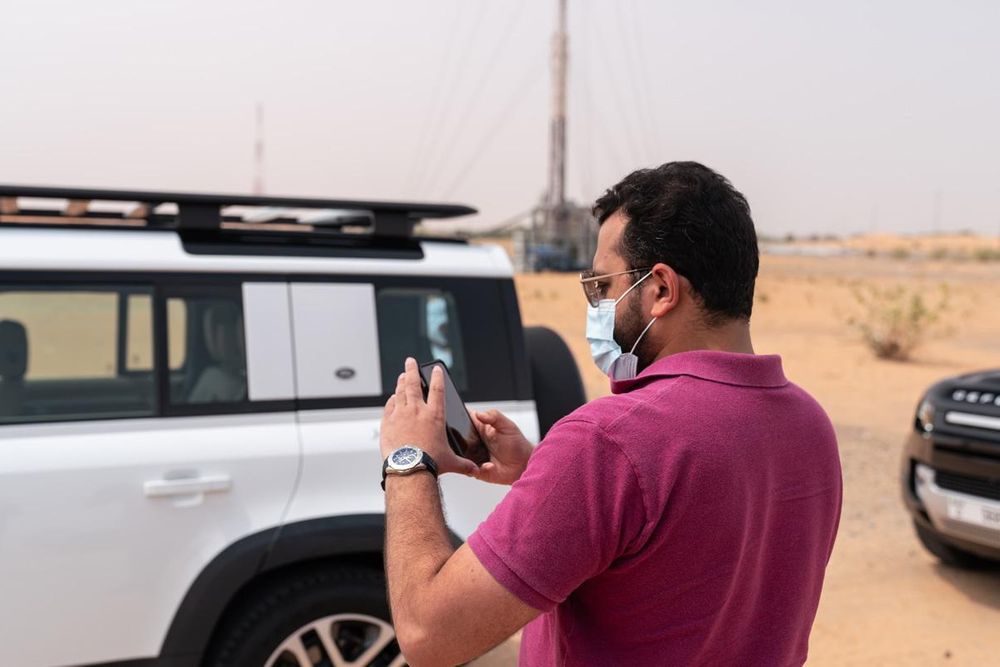 I am glad you asked because there is where the Defender truly stands out from the competition. LR has introduced its latest infotainment system on the Defender. Known as the Pivi Pro, this system is what makes the Defender genuinely stand out. All the car features of the car can be controlled via this system, including the off-road systems. However, what is unique and exciting about this system is that it comes with its own micro-sim card slots allowing it to have 4G and 5G connectivity. This automatically helps the users with real-time GPS, music connectivity, and most importantly, over the air updates. Gone are the days where you will need to go to the dealer to update software. The Defender can download required software updates at any time making the hardware and technology relevant all the time. This is a brilliant move by Land Rover.

Another interesting feature the Defender has for the off-roaders is the 3D surround cameras that provide 360 degrees of visibility even while off-roading. It also comes with ClearSight camera technology. That means the rearview mirror also doubles up as a digital display for complete visibility of what is behind the car and the front camera below the bonnet can show you precisely what is beneath the car in the forward direction.

The Defender being a modern car has a host of driving assistance and safety features.

Another good move by Land Rover is that you can pretty much customize the Defender in any way possible. From body size suspension, engines, rims, tires size, seating arrangement, interior material, and off-road equipment.

From the factory, you can have a hundred and seventy unique accessories – the biggest range ever produced for a Land Rover – including an innovative Exterior Side-mounted Gear Carrier.

However, what is unique and exciting with the Defender is that there will be a host of third-party official suppliers that would bring in their set of products, kits, and accessories which will let you tune, modify and set up the Defender in your own unique way.

Finally, I can conclude that the Defender is worthy of its name. It has successfully defended itself for being called the Defender. This is the off-roader for the future. It is the off-roader in which you can wear a tuxedo and attend a black-tie event in the middle of nowhere and come out looking as crisp as ever.