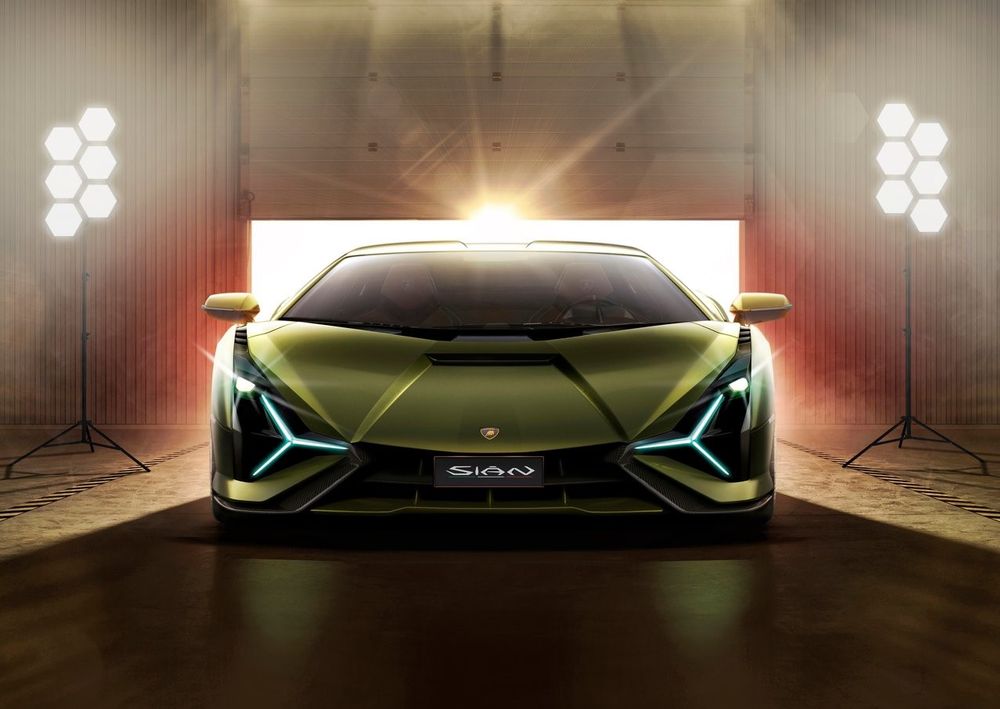 Lamborghini cars have always been about fantastic designs, powerful engines, an endearing soundtrack and awe-inspiring performance. However, the affable Italian marque has never really been a huge fan of hybrid technology in supercars -- never really bothering itself with equipping its loud tire-scorchers with heavy battery packs -- as optimum fuel consumption has never been their thing. As we know, many of Lamborghini’s rivals have had hybrid offerings, though that didn’t ever seem to bother the Bologna-based company. That, however, has changed now. And that’s all down to one car which has been the talk of the town - welcome the all-new 2020 Lamborghini Sian FKP 37.

Sian (in traditional Bolognese) translates to “thunderbolt”, which is a pretty apt name for a hybrid Lamborghini supercar, if you ask me. Meanwhile, the ‘FKP 37’ suffix was added to the name in honor of Ferdinand Piëch’s initials and his birth year of 1937. The Lamborghini Sian is an all new product, though underneath, it’s essentially based on the Aventador SVJ’s architecture. While many other cars in its class use a rather traditional lithium-ion (Li-Ion) battery pack to fulfill their hybrid strategy, Lamborghini has gone down the ‘supercapacitor’ path, instead. Unlike bulkier Li-Ion packs, supercapacitor units weigh far less but put out far more oomph.

One of the most vital factors for a Lamborghini to earn the distinction of being a Lamborghini has to do with the way it looks. On this front, the 2020 Sian FKP 37 knocks some of its competition right out of the park. There can be no doubt that this is a true Lamborghini, with body lines that are so sharp, you could cut yourself if you rub it the wrong way. Much of the design has been inspired by the venerable Countach and the whole body is made out of carbon fiber. The Sian’s silhouette looks mesmerizingly captivating - almost seems to be going at warp speed even when it’s standing still. The unmistakable wedge-shaped front end features way too many cuts and angles (plus carbon-fiber splitter/wing) to aid airflow, and the Terzo Millennio Concept-inspired headlamps along with its bold Y-shaped LED daytime-running lights can seemingly hold your gaze forever.

The Sian’s curvaceous-cum-thoroughly sculpted sides, with its ultra-low stance combined with Lambo’s signature scissor doors, huge wheels with center lug nuts, multiple air-intake channels and the “63” logo on the sides of the rear fins further boosts this supercar’s charm and character. The backend of the Sian gets Countach-inspired hexagonal tail lamps (six elements in all), an electronically-operated rear wing, active cooling vanes and a humongous air diffuser that’s accompanied by twin, hexagonal exhausts. 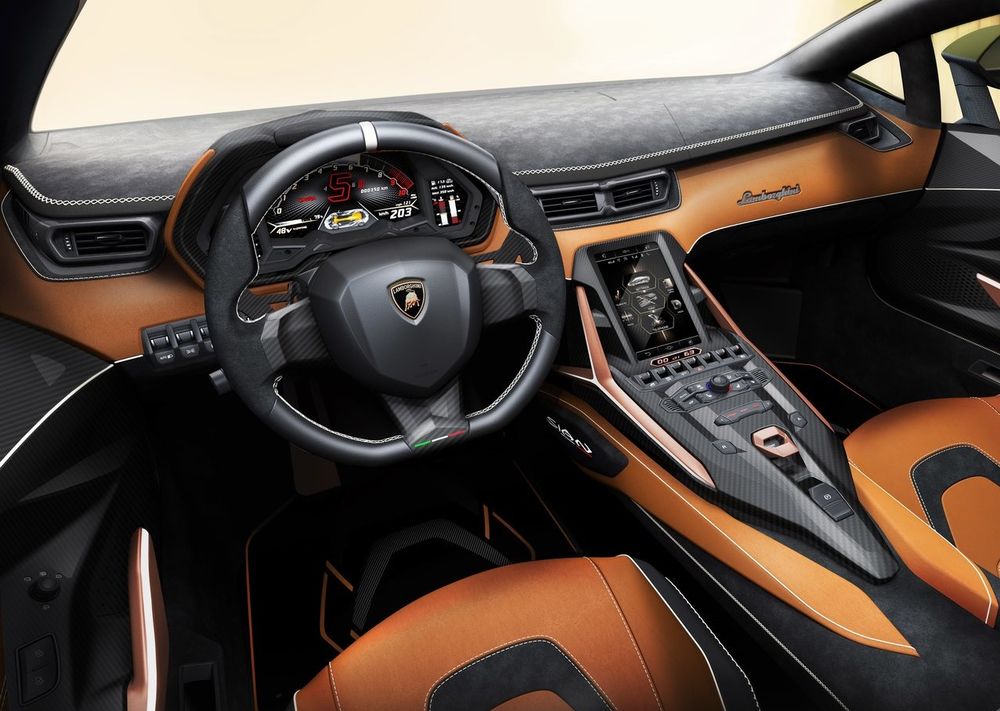 Compared to the flamboyant and aggressive exterior façade, the interior of the 2020 Lamborghini Sian FKP 37 is a pretty understated (for a limited-run Lamborghini). Though there are some interesting and cool bits such as the placard that reads serial number of the car, wedge-shaped glass panel in the roof, Lamborghini-favorite hexagonal patterns with some Y-shaped elements, Alcantara/leather/carbon-fiber trim, digital instrument panel and a vertically-arranged infotainment display. Still, this is a gorgeous place to be in.

Now for the most important part: power and performance. The former pairs a 6.5-liter V12 to a 48-volt electric motor - the latter being directly integrated into the Sian’s 7-speed Independent Shifting Rods (ISR) transmission. The entire system output is rated at 807hp and 720Nm of torque, meaning the Lamborghini Sian can crack the 100 km/h barrier from a standstill in under 2.8 seconds - making this the quickest-accelerating Lamborghini of all time. Meanwhile, the Sian’s maximum velocity has been electronically capped at 350 km/h; though it could likely go even faster! And even though the Lamborghini Sian is a hybrid, it can’t drive on electric power alone for any considerable length of time. 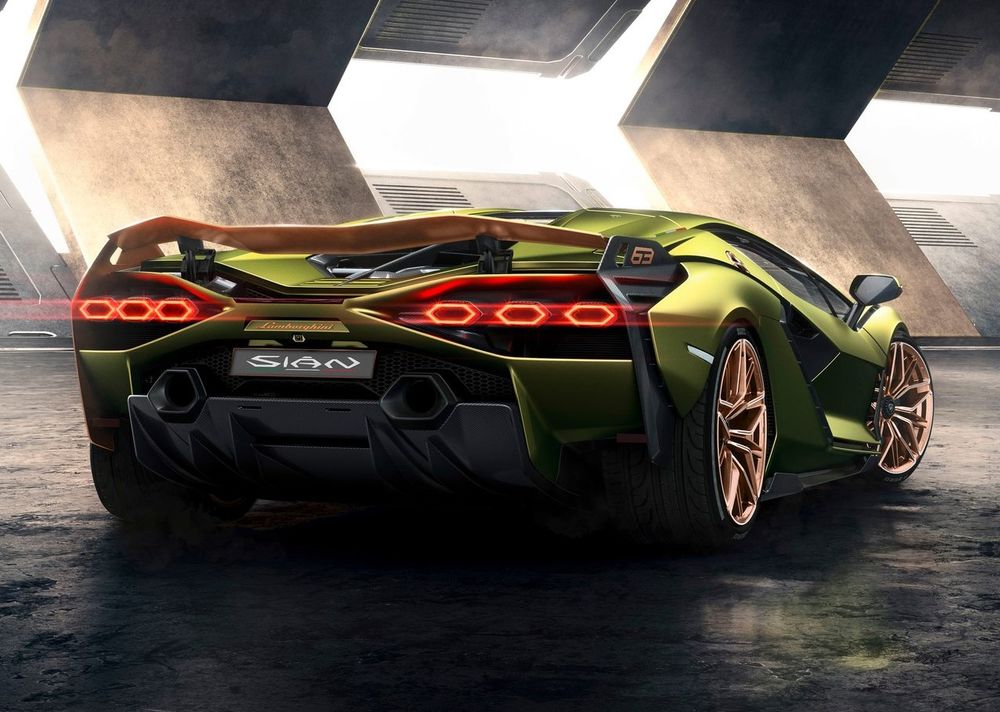 Lamborghini will only produce 63 examples of the Sian FKP 37 - each and every one of which has already been spoken for. Since you can’t buy one anyway, the Sian’s staggering $3.6 million asking price wouldn’t matter much now.