Comparison: Mazda6 vs Honda Accord vs Nissan Altima

YallaMotor.com is the first publication in Middle East to feature a three way comparison between the 2014 Mazda 6 2.5L, the 2013 Nissan Altima 2.5L and the 2013 Honda Accord 2.4L. This comparison was important because a huge proportion of car buyers in the Middle East purchase midsize sedans, particularly Japanese midsize sedans which are known for reliability and good resale value, more so in Gulf countries than other countries of the world.

The 2014 Mazda6 launch provided us an opportunity to test it against two of the most popular midsize sedans, recently released within the last 12 months, 2013 Nissan Altima and 2013 Honda Accord. We decided to pass on Toyota Camry, Hyundai Sonata and Ford Fusion because they are over one year old since being launched and their newer models will be launched soon. Chevrolet Malibu was also excused as three Japs vs one American would entail a apple vs orange comparison. My friends, Zaran and Ahmad accompanied me for this comparison and their feedback was invaluable. Now, let's begin. 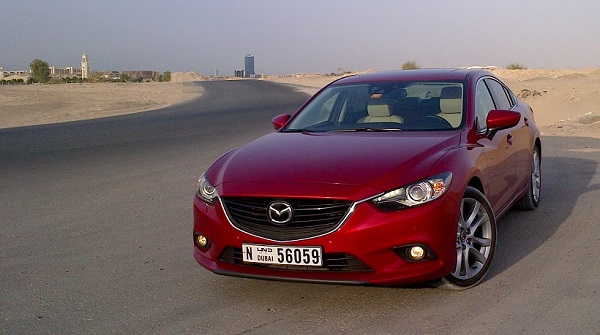 No question about it. Mazda 6 has far superior styling compared to its rivals. Mazda 6 recently won the Red Dot Design award and for good reason. It looks stunning. I have never used the word 'stunning' to describe a 2.5 liter midsize sedan! To be fair, the Altima and Accord both have pretty good styling for a midsize sedan but the Mazda 6 has taken it to a different level altogether. The blood red color choice was spot on as well. Kudos to Kodo, the Mazda design philosophy that has focused on a very intense and aggressive design style.

Forget everything else, it has the sportiest front bumper in the segment. It has daytime running lights, which can be found in it's rivals but not in such as stylish manner. Add to that body colored bumpers, body colored door handles, body colored mirrors and most of all, 19 inch alloy wheels in the top spec version and you wonder where Mazda has been all these years. Comparing rears of each model, only Mazda 6 has dual exhaust pipe finishers.

If all this was not enough, Mazda 6 has incorporated an Adaptive Front Light System that adjusts the front lights when turning corners. For dense fogs on Dubai - Abu Dhabi drives, there is a rear defogger and front fog lamps too.

This was unanimous and undisputed.

As evident from the prices above, Nissan Altima is the undisputed winner in all price brackets. It must be noted though that Nissan Altima does not come with leather seats in the full options version.

For simplicity's sake, we are comparing the top spec version of each car in our review. We identified 6 areas of comparison: 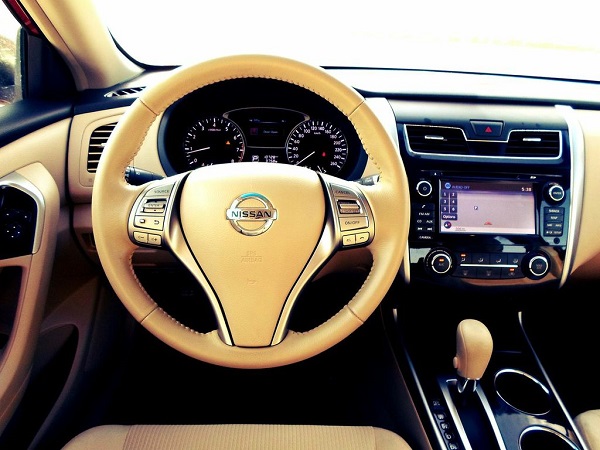 Nissan Altima has the best quality here, followed by Accord and then Mazda 6. The difference is not huge between them but it's enough to identify the winners. It just goes to show that having a higher number of speakers is not enough. Altima has 6 speakers which is less than Accord (7) and Mazda 6 (11 in top spec). Despite the lowest number of speakers, Altima has a more crisp sound, the speakers crackle the least at high volumes and the radio reception is sharp.

Honda Accord has the biggest touchscreen at 8 inches, followed by Nissan Altima (7 inches) and the biggest loser being Mazda 6 at 5.8 inches. All three models have rear view cameras with Bluetooth, USB and AUX connectivity. Nissan Altima is the only model which has remote engine start option, allowing you to pre-cool your car before you get inside. Altima won this battle convincingly. 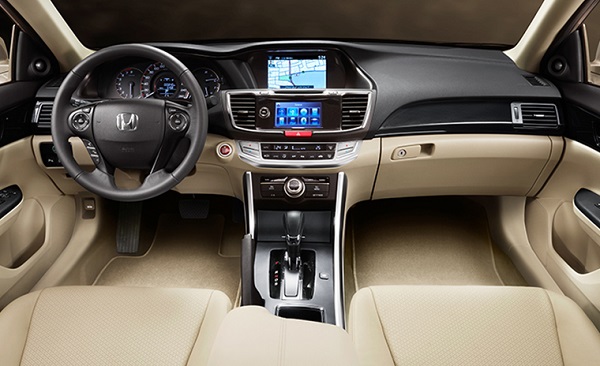 Honda Accord has better material quality, although only slightly better than Mazda 6. Lots of soft touch material with quality leather seats in the full options version highlight Accord's strength. Mazda 6 is close, however try shifting gears and you can actually hear the cheap plastic during the transition. Mazda 6 has very comfortable seats, semi-bucket too, however the beige color is prone to dirt marks. Mazda 6 has a lot of soft touch materials too, just not as premium as Honda Accord. To summarize, go for Mazda 6 if you're looking for a sportier interior, go for Accord if premium interior is your choice. Nissan Altima comes in third place largely because of no leather seat options and less soft touch material compared to Accord.

Who's got better A/Cs? Honda Accord again, followed by Nissan Altima and Mazda 6. To be fair, all of them have pretty decent A/C's and yes all three have rear A/C vents so good job all round. However, we had to pick one winner and we picked Honda Accord for it's ice-cold air conditioning, despite all the hammering we gave it under the hot Ramadan afternoon sun! 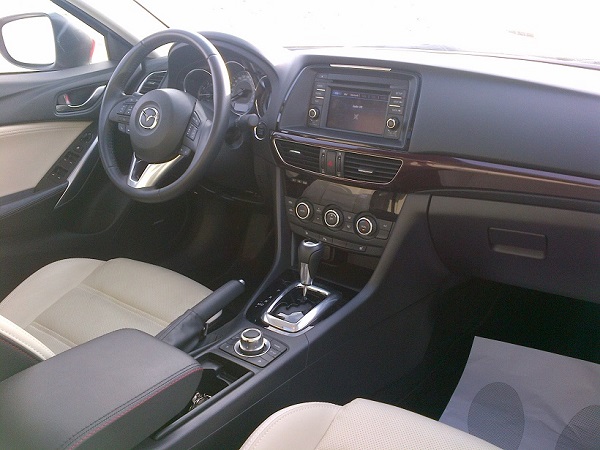 This is the area where Mazda 6 shines like a beacon. It has packed more convenience features than sardines in a can. It has adaptive cruise control which is unheard of in a 2.5 liter sedan. It has paddle shifters which are absolutely useless considering the engine size. It has some very useful features like rain sensing wipers, auto head lamps, map reading lamps, even seat heating facility which makes absolutely no sense but it's still there! It's got the Jaguar style knob for adjusting all the above settings. It has a Volkswagen GTI style red leather stitching on the steering and center armrest. The cupholders are two but they are smaller than they should be.

For sheer amount of tech and gizmos in a midsize sedan, Mazda 6 wins this one hands down.

Having examined the interior from all angles, Honda Accord has a definite edge over it's rivals. However Mazda 6 does not lag far behind, all the while having a more competitive price. 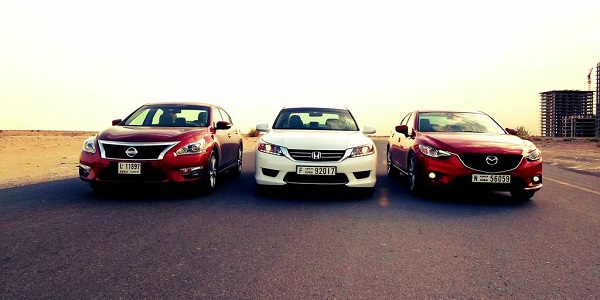 With 19 inch alloy wheels in the top spec version, could we expect other models to have a chance? Mazda 6 again wins this round with superior road grip, handling and cornering capabilities, followed by a too-close-to-call finish between Altima and Accord.

Get Mazda 6 if you're looking for a sporty-ish suspension. Accord and Altima both have very comfortable suspensions.

Accord has the quietest cabin, followed by Mazda 6 and the noisy Altima with it's CVT drone whenever you accelerate above 100 km / h.

With superior drive and handling, not to mention bigger wheels, adaptive cruise control and decent road noise levels, Mazda 6 has the upper hand.

With a price lower than Honda Accord, interior technology better than Nissan Altima and the hottest looking midsize sedan by far, it's Mazda 6 that is our pick of these three models. It will face stiff competition from upcoming launches of 2014 Ford Fusion, 2014 Malibu and 2014 Camry. Mazda has done it's homework, some would say a bit too much homework by offering many unnecessary features, such as paddle shifters, heated seats, etc. It does not have the best interior but it comes close and it's drive is superior by a margin when compared to it's rivals. Hence for now, we reckon it rules the midsize sedan segment. Good job.