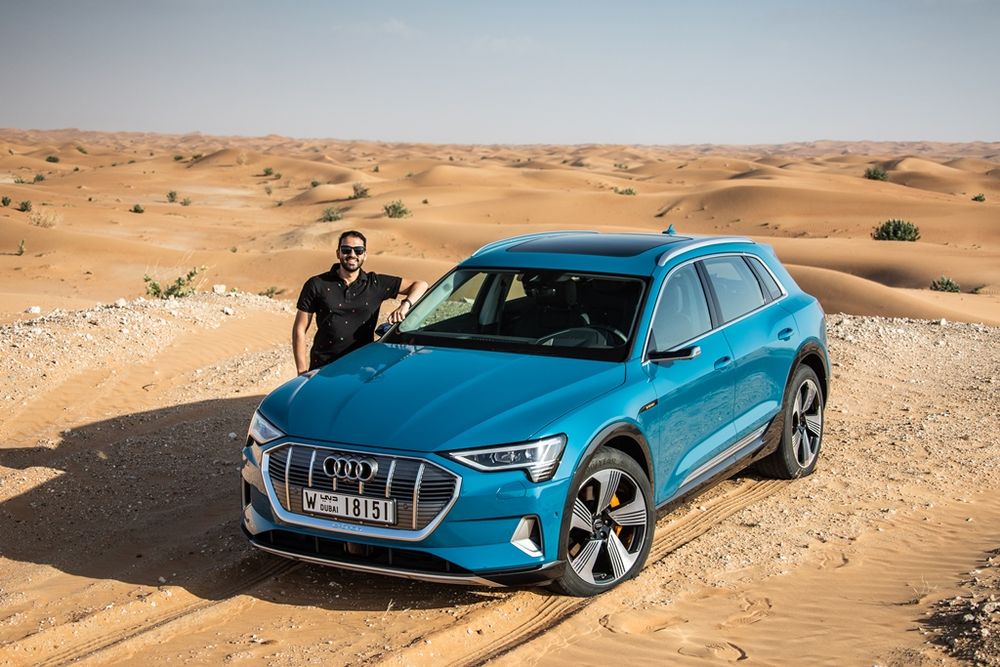 Electric cars, you can love them or loathe them, but you can’t ignore them and that’s because manufacturers from across the world are jumping aboard this lucrative segment that is heralded as the future of the automotive industry. After much contemplation (and possibly a strong push after Mercedes-Benz announced its EQC) Audi has made the leap and introduced its first all-electric vehicle, the e-tron.

Launched in Abu Dhabi, a city that is home to Masdar (one of the world’s most sustainable urban communities and a low-carbon development) the Audi e-tron challenges the electric car space dominated by the likes of the Tesla Model X and Jaguar I-Pace. Built for sport, family and leisure, the e-tron slots between the Q5 and Q7 dimensionally but offers the spaciousness and comfort of one of the brand’s full-size models. 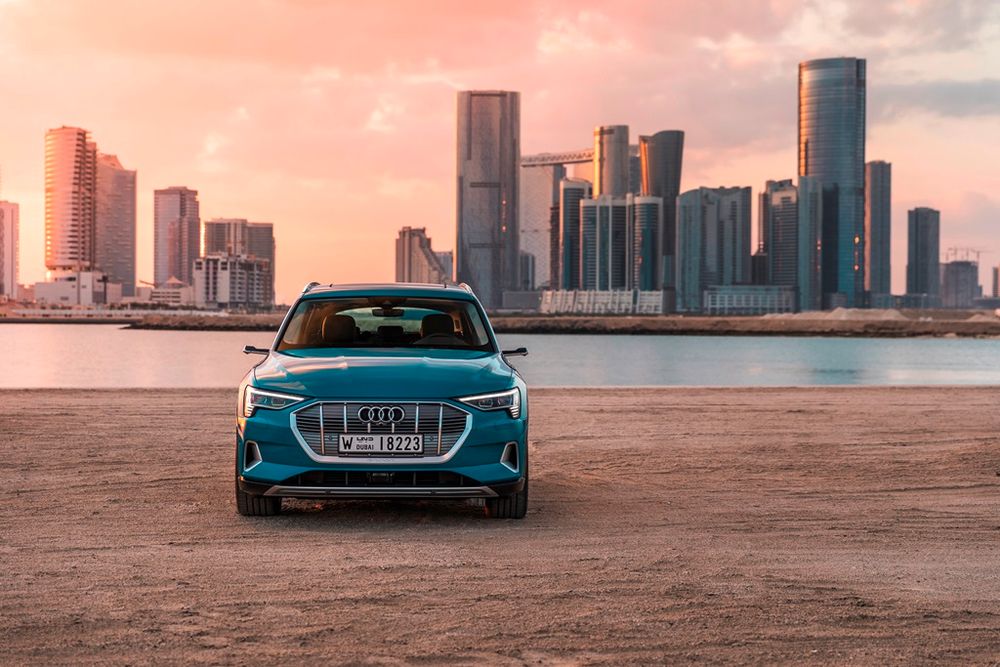 Standing at 4,901mm long, 1,935mm wide and 1,616mm tall, there isn’t much to differentiate the e-tron from its petrol-powered siblings, apart from the fact that it’s missing tailpipes, a fuel tank cap, and traditional side mirrors. Revolutionary without being ostentatious, the e-tron rocks the brand’s new grille with five distinct slats that aid battery cooling, subtle horizontal bars in its headlights and digital side mirrors that are nothing short of revolutionary.

On the inside, the e-tron bears great resemblance to the all-new A8 and Q8 with two large MMI touch response displays dominating the dashboard. Replacing nearly every conventional switch and control, the new system offers plenty of customization and the ability to use natural voice control to carry out certain tasks. For instance, saying something as simple as “I’m cold” triggers the A/C system to increase the temperature, or “I’m hungry for Italian” prompts the navigation system to pull up Italian restaurants in the area. 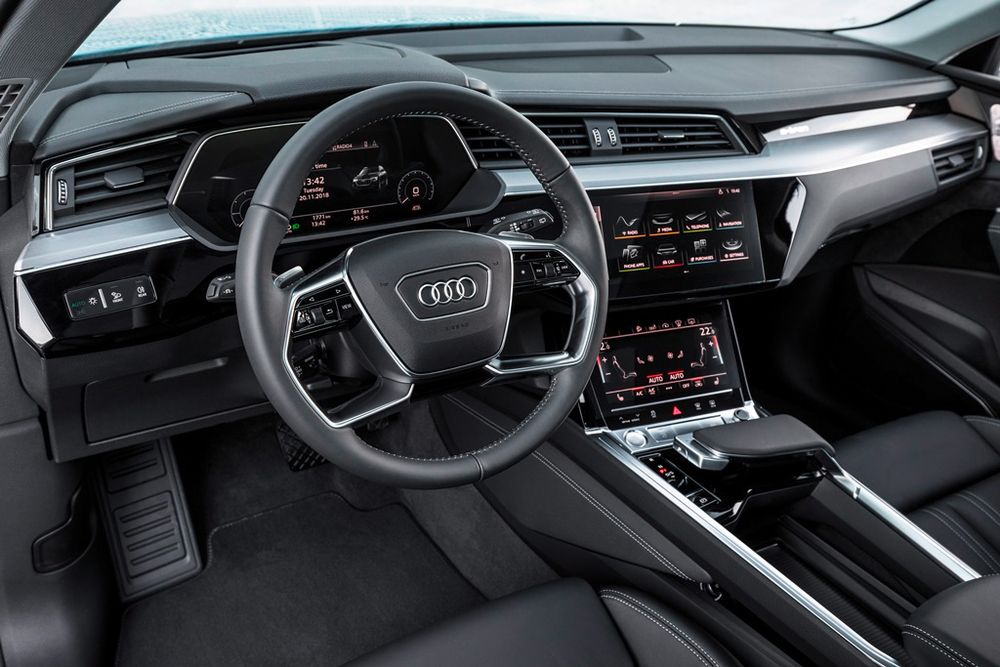 Concealed out of sight and under the floor of the e-tron is its party trick, the 95kWh battery pack that generates 400 horsepower and 665 Nm of torque. The first of its kind, however, the e-tron is equipped with the brand’s popular Quattro all-wheel-drive system but with an electric motor residing on each axle, it’s Quattro unlike anything before. With enormous pulling power, the e-tron sprints from 0 to 100km/h in an eerily silent 5.7-seconds and bears an electronically limited top speed of 200 km/h.

Despite the Audi drive select offering numerous drive modes (seven, to be precise) and altering the behavior of the standard air suspension, traction control, and transmission accordingly, the e-tron doesn’t try to be the sportiest amongst its rivals. Instead, it focuses on beating its rivals by doing what it does best: being effortless and being comfortable. 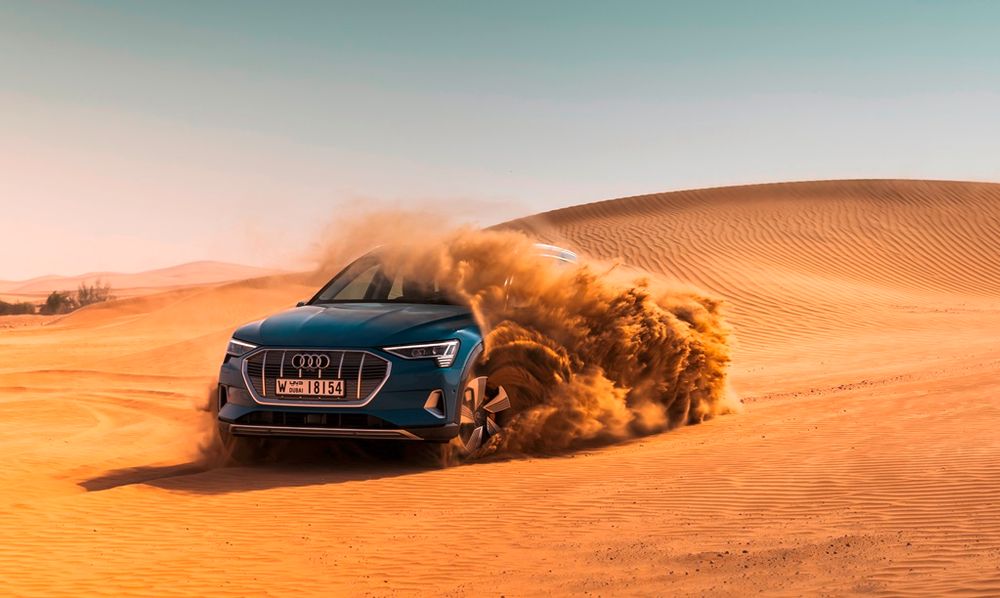 Part of the e-tron’s capability to deliver 400 kilometers per charge is down its ability to be extremely aerodynamic and capture the concept of regenerative braking better than any other electric car to date. By recovering energy in two ways (coasting and braking) the electric motors function as a generator and convert kinetic energy into electric energy majority of the time.

In a country like the UAE, with various forms of electric car chargers spread across malls and petrol stations, a full charge is expected to cost between AED 13 and AED 26, which is significantly cheaper than the price of petrol. The other great thing about the e-tron is that while many fear the longevity of the battery inside their EV and the high cost in replacing the batteries frequently, Audi offers its e-tron with an 8-year/160,000 km warranty specifically for the battery alone. 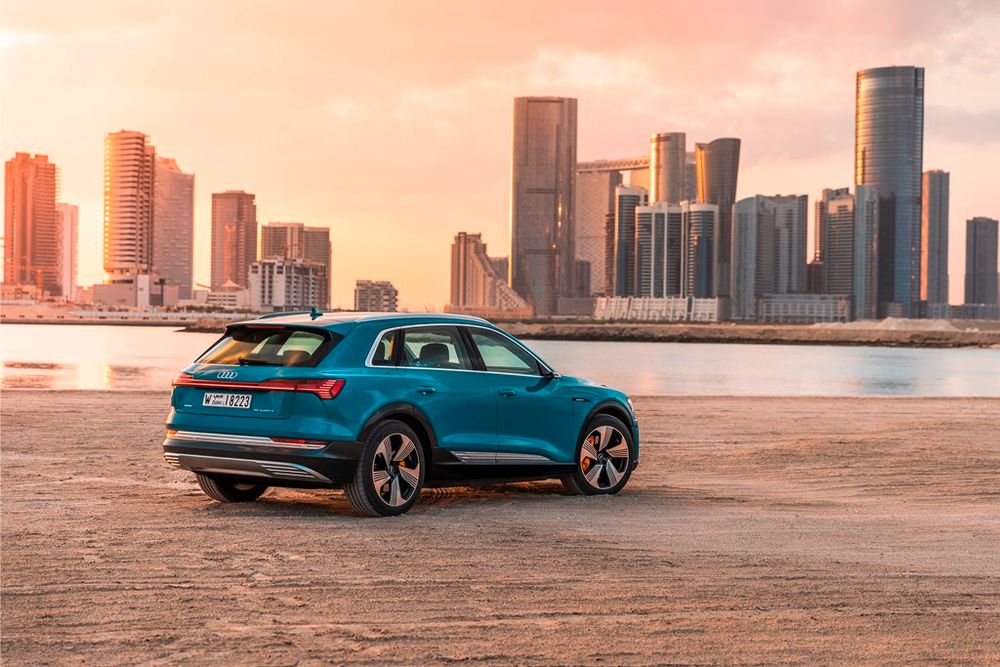 With deliveries expected to begin in the region in the third-quarter of 2019, pricing for the e-tron remains vague with some expecting it to sit close to the Q8 at approximately AED 380,000. What one needs to remember about the e-tron is that it’s everything people have always wanted from an EV. It looks like a normal car, it feels like a normal car, and it drives like a normal car. It makes adopting the EV lifestyle that much more convenient.

Chevrolet Bolt 2019 launched in the UAE