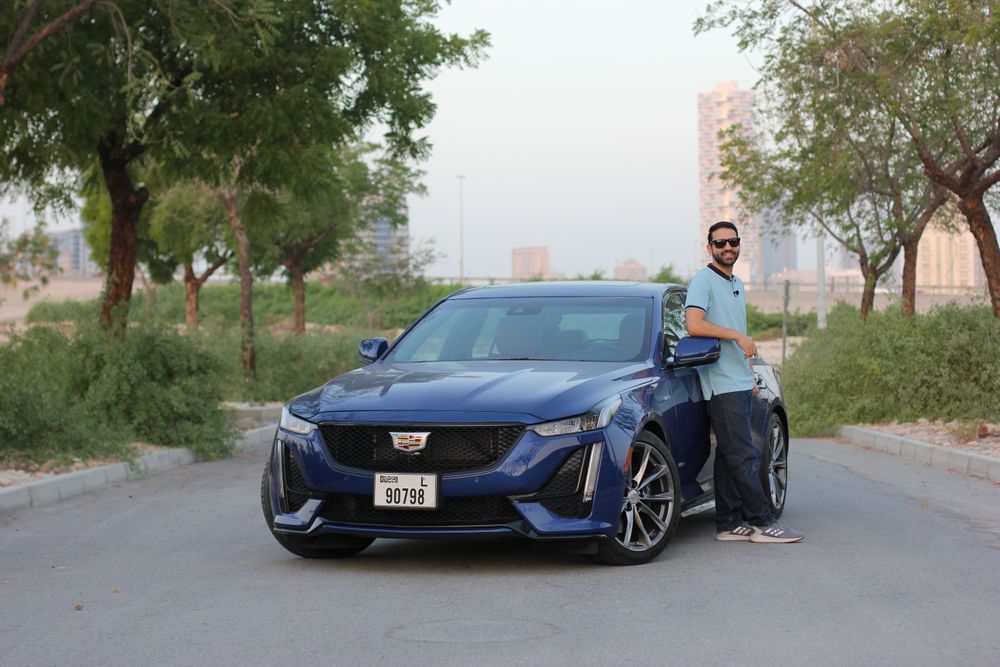 This is the Cadillac CT5-V, a bigger, better, and bolder version of the CT4-V that we reviewed earlier and you read about by clicking here. With a starting price of 275,000 Dirhams, let’s find out how this CT5-V stacks up against cars that seem to rule this space from Audi, BMW, and Mercedes-Benz. 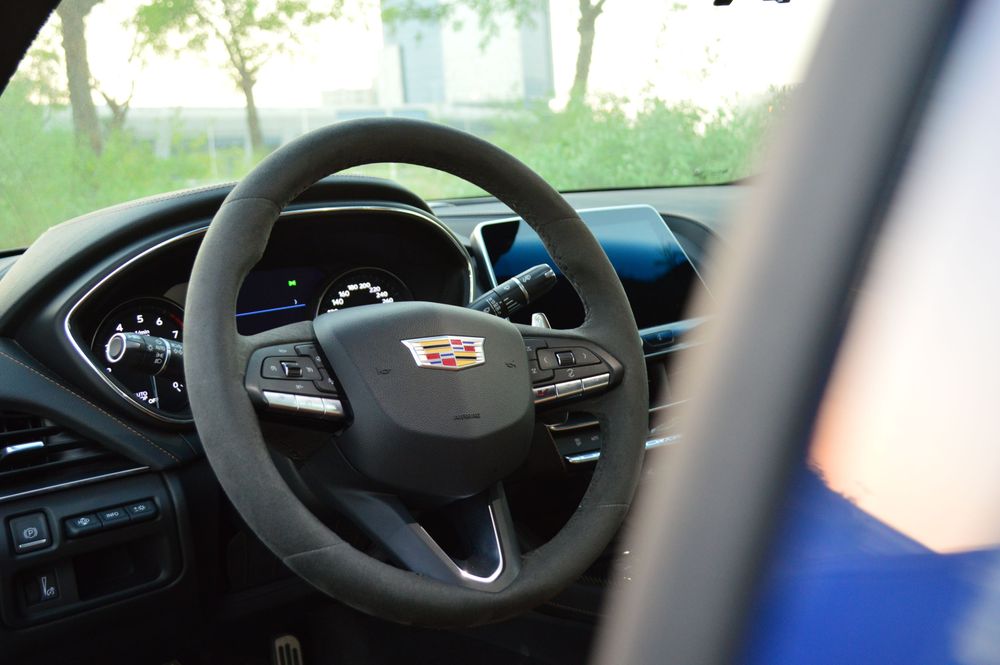 Now, those of you, who have read our CT4-V review, will know that I complained quite bitterly about how dreadful the exhaust note was and how unengaging the car was to drive. Strangely, it feels like Cadillac was listening, because everything that didn’t seem quite as right with the CT4-V has been rectified in this CT5-V.

The exhaust note is brilliant and because it has different modes, it sounds throaty at low speeds and even pops at higher speeds. As for driving engagement, the CT5-V handles like a true sports sedan; it spins its rear wheels when you dip the accelerator pedal deep enough and even kicks its tail out around corners for added excitement. 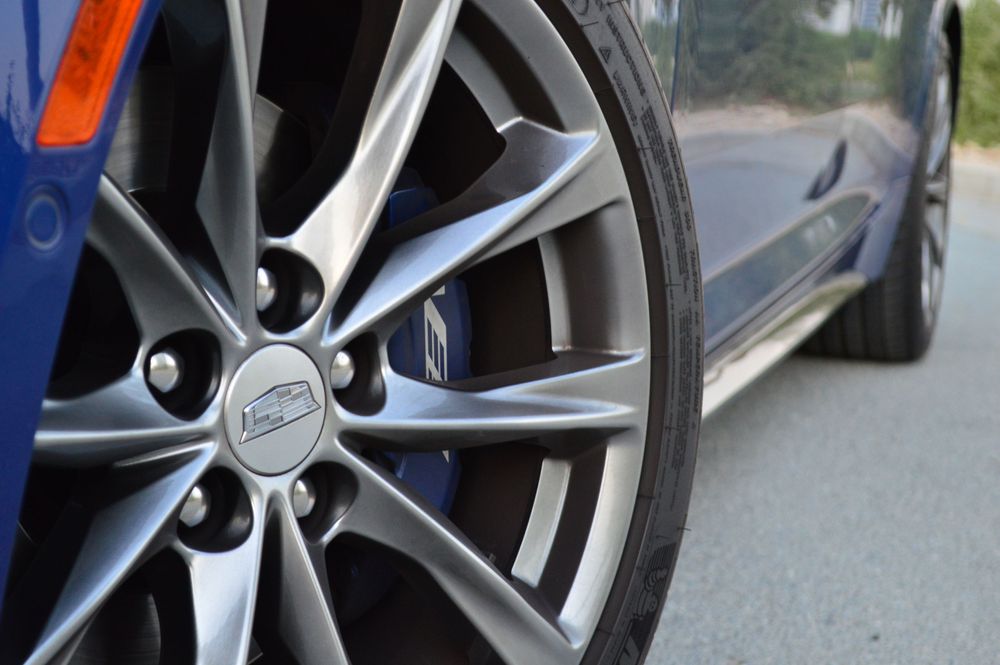 Since it is rear-wheel drive, there is an electronic limited-slip differential and a performance traction management system that offers 5 levels of control with each allowing you to slide the car that little bit extra. Should you accidentally overstep your braveness, however, there are Brembo brakes that are strong and extremely quick to respond.

In terms of power, the standard CT5 is powered by a 2.0-liter turbocharged engine but this being the “V” gets a 3.0-liter twin-turbo V6 that pushes out 360 horsepower and 550 Nm of torque. Much like its smaller sibling the CT4-V, the CT5-V also gets a 10-speed automatic transmission and a beautiful set of magnesium paddle shifters. 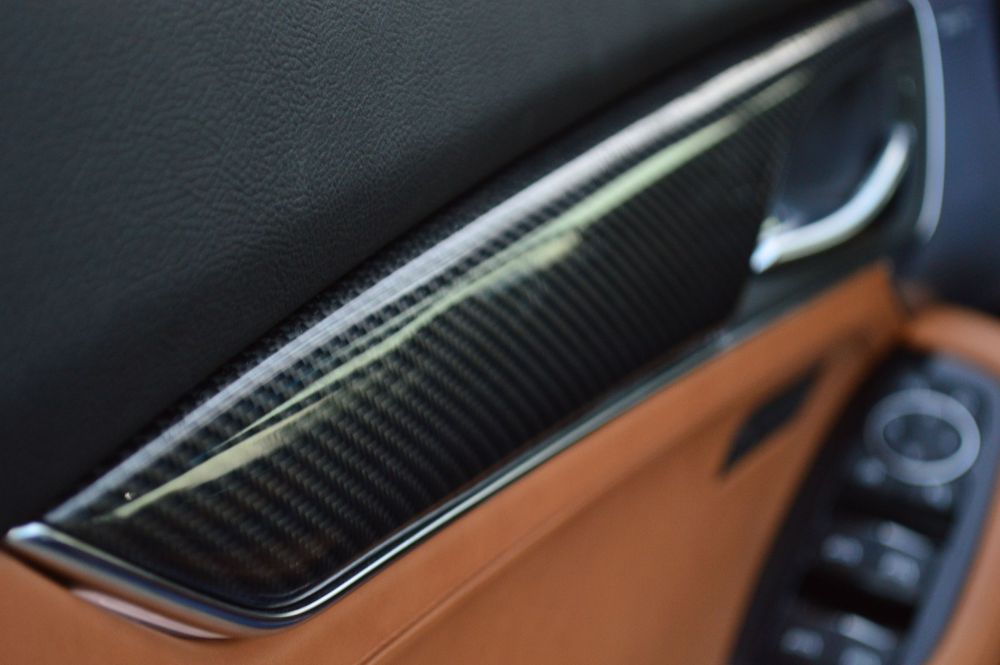 Very simply said, the big differentiator between the CT4-V and the CT5-V is how different both cars feel. Sure they look quite similar inside and out, but from the driver’s seat, they are completely different. The CT5-V feels powerful, feels aggressive, and just has so much more excitement to offer that it is everything the CT4-V should have been and more. 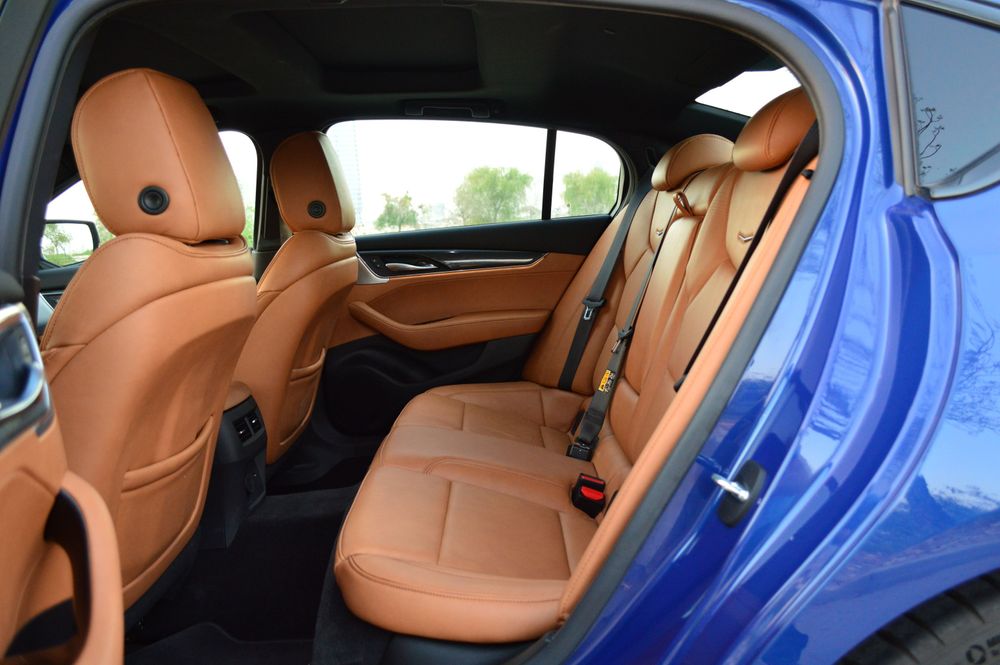 Likewise, when it comes to the interior, the CT5-V is a significant upgrade, especially in the quality department. There’s Alcantara on the steering wheel, carbon fiber on the dashboard and door panels, and everything is padded or covered in leather, leaving very little exposed hard plastic.

As mentioned earlier, the design is quite similar to the CT4-V, which isn’t a bad thing because it does look and feel quite sporty. There is a bigger infotainment screen that is 10-inches in size, but apart from that, it is nearly identical with buttons, switches, and knobs exactly where you’d expect to find them.

Being a larger car, space in the back is much better than what the CT4 has to offer and there are also A/C vents, cup holders, and charging outlets in the form of a USB and 12V outlet. But by far the most impressive thing is that the same great quality that started in the front has been carried over into the back, with carbon fiber on the door panels and soft leather on nearly everything else. 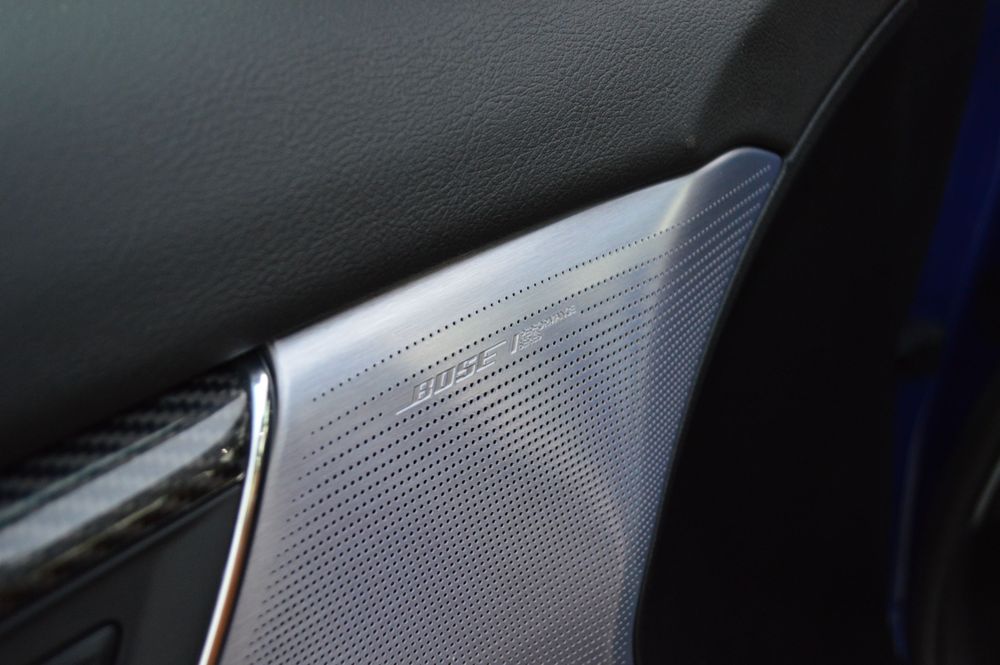 Going up against the best that the segment has to offer, Cadillac hasn’t held back on the features and so there’s everything imaginable from a panoramic roof and 15-speaker Bose audio system to 360-degree cameras and automated parallel and perpendicular parking that ensure you park perfectly each time and every time. 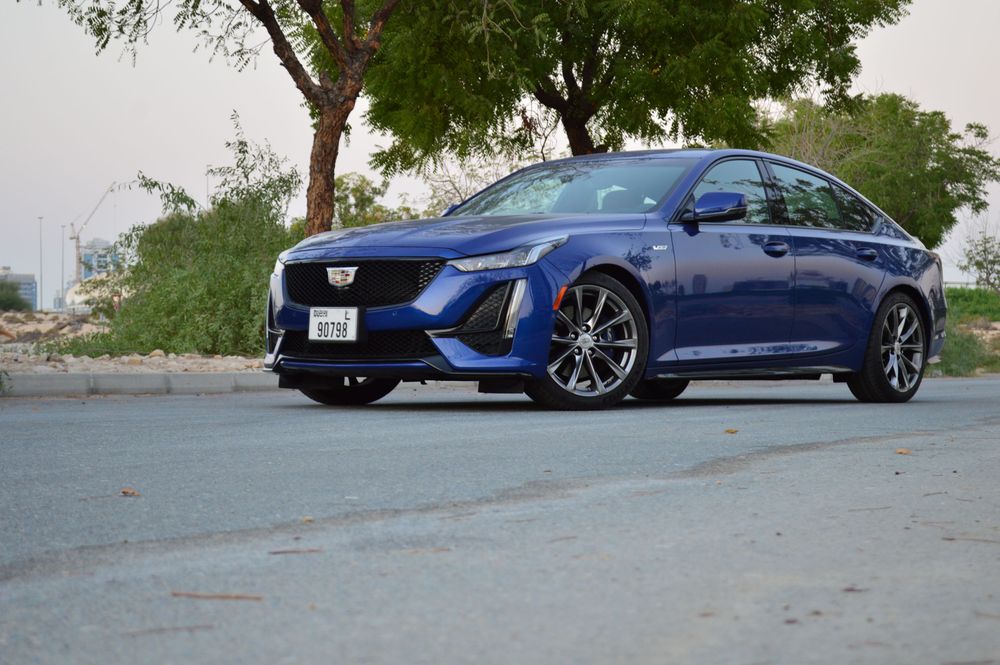 When it comes to the styling, there really is no other way to put it- the CT5-V is a stunning sedan. It’s low, it’s wide, and the black-out treatment on the grille, window lining, and diffuser, really does give it a menacing appearance. On the side, there is a V badge on the fender and 19-inch alloy wheels that hide Brembo brakes behind them and do a fabulous job of filling up the wheel arches.

In the back, the sportiness continues with a camera mounted in the fin, forming part of the CT5-V’s 360-degree camera system. There are also tinted tail lamps, a lip spoiler, and four functional exhausts that let you know from pretty far away that this isn’t a car you want to mess with. 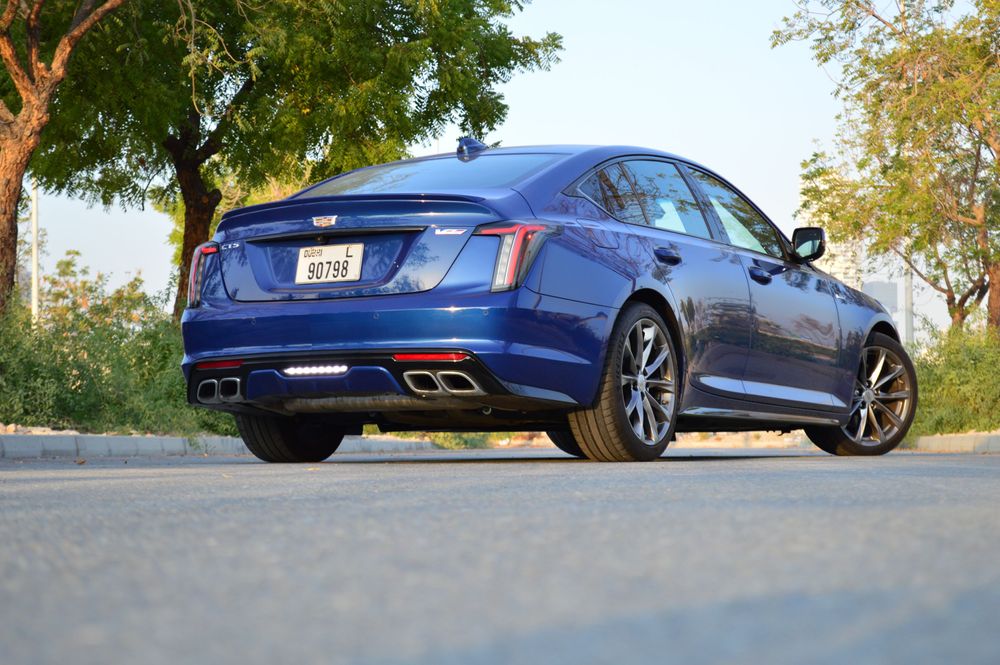 With a starting price of AED 175,000 for the standard CT5 and AED 275,000 for the CT5-V, the American sedan has a lot going for it. It’s essentially a BMW 5-Series at 3-Series M-Sport money, or if you aren’t a fan of the Bavarians, then it’s a Mercedes-Benz E-Class at C-Class AMG money. Essentially, it’s the underdog in its class and if you’re on the lookout for an affordable sports sedan, then this isn’t the car you would want to overlook.