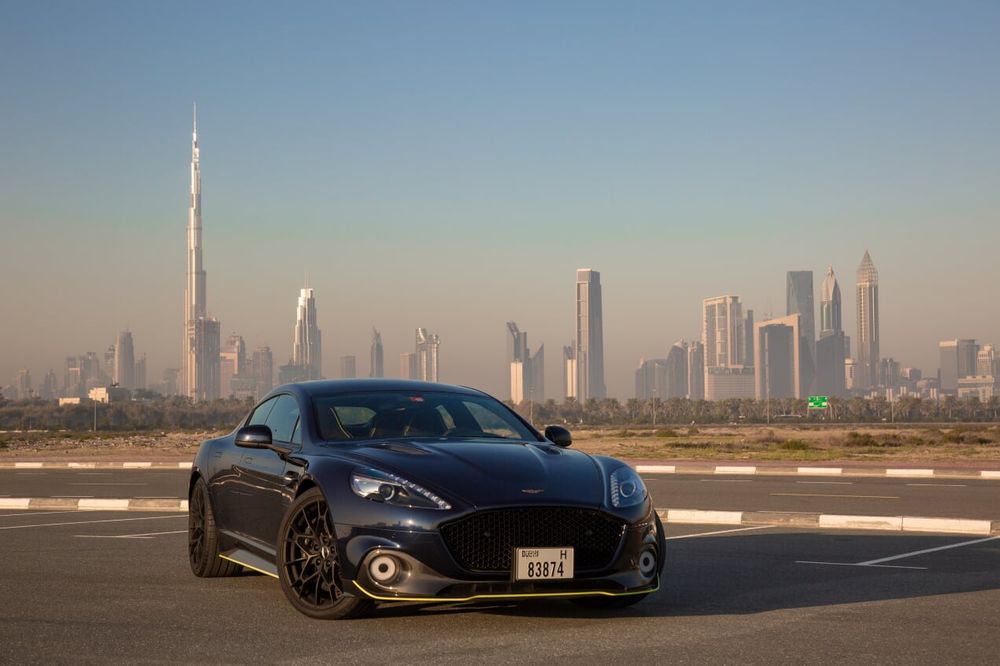 Say hello to the Aston Martin Rapide AMR. I know you re-read that sentence again. You are wondering why I am asking you to say hello to a car that is technically ten years old.

Well, you are right; the Rapide is ten years old. Introduced in 2010 it is Aston’s first four-door car after the Lagonda. The Rapide is based on a stretched DB9 platform. The Rapide AMR is the last car from Aston Martin to be based on the VH aluminum platform.

Okay, so you may know all of the above, and kudos to you for knowing that. However, this is not just any Rapide; this is the Rapide AMR. For those who do not know about it, AMR stands for Aston Martin Racing.

Since we are talking about racing, let us look under the skin to see what’s happening there. The Rapide AMR comes with the superstar engine from Aston Martin. The stonking 6.0-liter V12 engine produces 580 HP and all of this power is sent to the rear wheels via an 8-speed gearbox.

It does 0-100 kph/0-62 mph in a neck-snapping 4.1 seconds. The top speed is 330 kph/205 mph. Considering the fact that this is a four-door family car. This is venturing into supercar territory. Not bad at all for a ten-year-old car.

The Rapide AMR jumps the line like a cheetah on a chase. The kickback from the car is violent enough to make you lose focus, and you have to pay attention when you floor it lest you end up in the Ferrari you are drag racing against.

The driving experience is analog, and I love it. The Rapide AMR speaks to you via the steering, the pedals, the gear shifters, and the seat. It is at all times communicating with you as to what is up with it and wants you to be involved in deciding how it should drive.

The drive experience is enriching when you get the gear changes right, and the car shows you its appreciation by making the right engine and exhaust sounds. Oh, what a glorious sound this car makes. In this car, you are hunting for isolated areas so that you can floor and hear the engine sing. 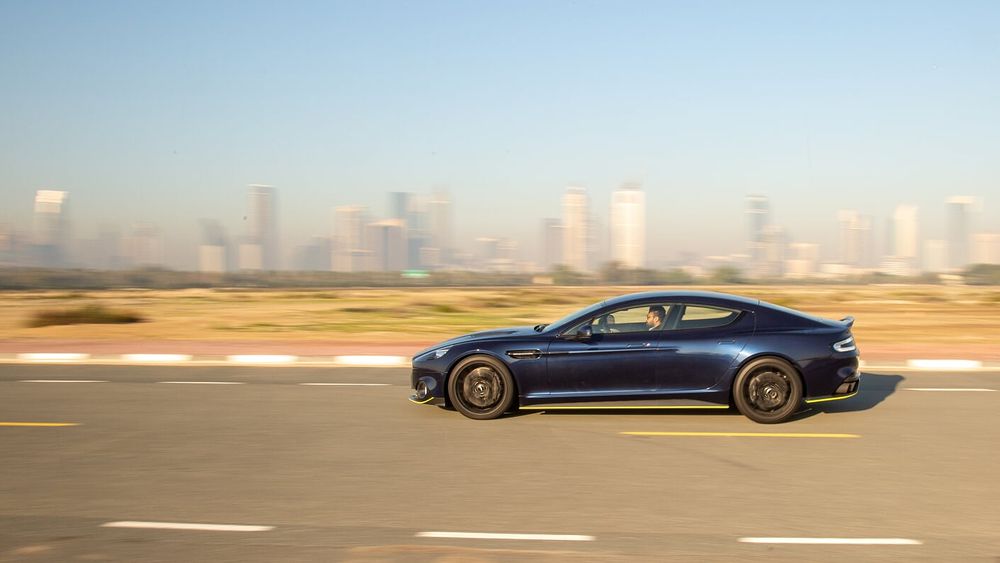 Weighing in at 1990 kg or 4387 lbs, it is not a light car. However, never at any given point of time does it feel heavy or bloated. It has an old school rack & pinion steering and is light and precise and weighs up accurately.

There is minimal body roll, not that like you can feel it and the car plays into your hand. It is like having Aladdin’s Genie at your fingertips. You turn the steering wheel to where you want to go and push the go-fast pedal, and the car performs as per your commands.

In short, it handles very well for a car of its size and weight without too much electronic interference. I kept on hunting for fast corners and sweeping bends I could take in this car. During these bends and corners is where the Aston Martin Rapide AMR truly serenades and seduces you.

The Rapide had a facelift in 2013 and then was improved upon in 2015. When you look at it now, it looks fresh and modern as ever. Especially in AMR guise. It sits low and has an aggressive stance. It sits on massive 21-inch wheels. It has a carbon fiber bonnet with cooling vents for the brilliant V12. It also comes with a front lower lip spoiler, side skirts, rear boot spoiler. As per me, this is the perfect balance of aggressiveness and elegance. It portrays the car’s potential in a restrained format.

This car is a head-turner. When waddling through traffic, people will turn around and look at the car and then after a few steps turn back and steal more glances of this beauty. I had a young boy walk along with the car for a good 15 minutes just looking at it. When he reached below his home, he waved goodbye to me. This is what cars like these are designed to do. They are intended to aspire, inspire, and be wallpaper material. Mission accomplished by Aston Martin.

The Rapide AMR comes in three different design schemes. The Standard and Silhouette schemes offer four colors – Mariana Blue, Scintilla Silver, Lightning Silver, and Onyx Black and they all have AMR Lime accents to the splitter, sills, and rear diffuser. The Silhouette scheme abandons the Lime accents and instead adds a full-length contrasting stripe in China Grey or Clubsport White.

My car had the Mariana Blue with Lime Green accents, and I fell in love with it head over heels. 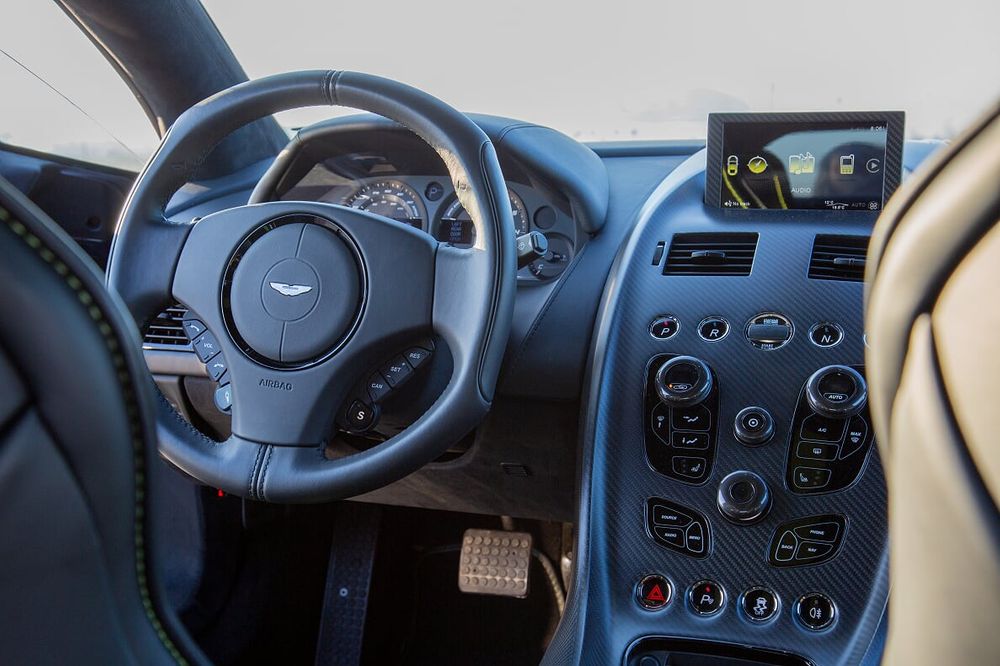 This is where you can start seeing the age of the car. The center console is entirely made up of carbon fiber. The Aston Martin Rapide AMR comes with an outdated infotainment screen. However, it does come with modern amenities such are Apple CarPlay and Android Auto.

This car still retains an old Aston feature where you need to insert the key into the center console to start the car up. I found this incredibly charming. Something that makes you more involved in the driving experience.

This is the only car you can spec with the optional steering wheel from the Aston Martin One-77, and my press car had this feature. My feelings for this steering design are a bit ambiguous.

The Bang & Olufsen stereo is superb. Overall it is a good car to be in, and you will forget everything about the outdated looking interiors the second you start driving it.

Since this is a four-door car, I have to mention the rear seats. I am of average height and found it a task getting in and out of the rear seats. Plus they are not comfortable. Adults might not mind them for short distances; however, they are best suited for kids. 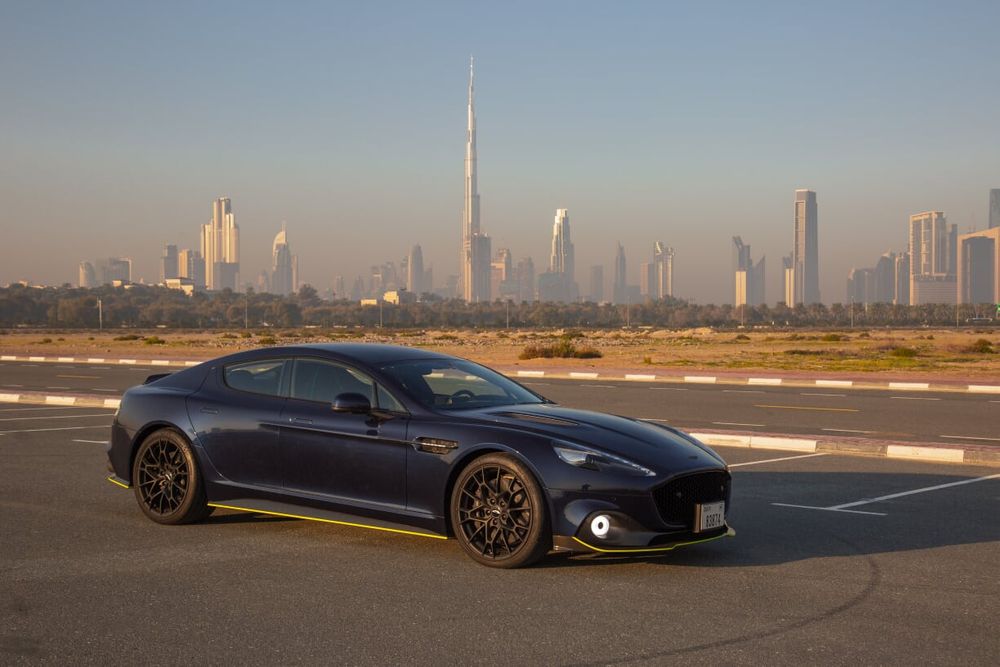 The Aston Martin Rapide AMR is not your everyday run of the mill car. Priced at around $300,000 it has crossed that. It has become something special, something rare. With the advent of EVs and hybrids, cars such as these will be remembered and cherished. Even Aston Martin is abandoning its V12 in favor of a Hybrid V6 for its future vehicles. This makes the Aston Martin Rapide AMR highly collectible. It is the last of an era. Only 210 will be built. Buy yours now.